When you got to the office today, what was happening? Grammatically speaking, your arrival probably interrupted a wide array of activities. Interruption here doesn't mean that you stopped what other people were doing, though you might have. A grammatical interruption only means that there were ongoing actions in the midst of which your single abrupt action occurred.

When I got to the office, Wendy was opening the mail, Bradley was drinking coffee, and Joel was talking about the Zodiac Killer.

Notice that getting to the office didn't really stop anyone from continuing what they were doing. The act of arriving was a one-time deal, though, while every other action in the sentence was an ongoing one. The "transition" in transitional verbs lies in that difference. The attention of the listener shifts from an ongoing action to a singular one or vice versa.

The progressive or continuous tense is the only way the English Language has to indicate ongoing action. When an ongoing action is interrupted, the past progressive is used. That means that the past tense of the helping verb is employed.

Of course, the action need not be such a life and death scenario, and the interruption need not literally stop the progressive verb.

Using the progressive tense to prepare the reader is accomplished with dynamic verbs. Not all verbs are capable of change.

Some verbs are static, describing permanent states. No one would ever say "he was having blue eyes" or "she was being short." Being short and having blue eyes are things that cannot change and thus they cannot indicate a transition or ever be interrupted.

Unless you're writing science fiction, people will find it odd and humorous if you say "he was living on Earth." No one you're talking about in a real-world situation will be living anywhere else anytime soon.

Conversely, if you say "John was living in Berlin," the listener will know that John no longer lives there or will at least be primed to find out what happened next.

Here are some dynamic verbs that you might see in your everyday life that indicate transitional events. Don't think that this is a list of every verb of this kind; it serves only as an illustration of the way such verbs function.

Possibly the most important thing about transitional events is that they engage the listener or reader. When people hear verbs in the past progressive, their brains have been trained to wonder what happened next. Speakers in business and negotiations can use the past progressive to their advantage because it includes listeners more than any other tense.

At meetings, someone might combine the past progressive with the present perfect progressive to even greater effect. A sentence like "We've been working on these ideas and were wondering what you thought" has one action that will continue after the meeting is over and a second action that will stop when the listener literally interrupts it.

Combining tenses like this can create a friendly atmosphere that keeps conversations going in and out of the boardroom. Using the past progressive tense to indicate a transition and prompt listeners gives your speech and your person an air of openness that is always appealing. Incorporate it into your speech and watch how differently people react to what you say! 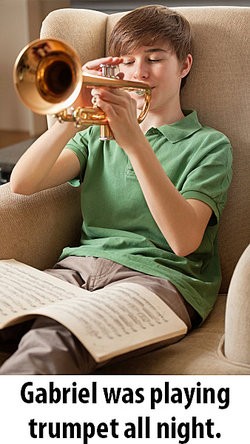