What Is an Auxiliary Verb? Types and Uses Explained

You may have heard auxiliary verbs referred to as helping verbs, but what is this type of verb, and what does it do in English? When we say it is "helping" a main verb, we mean it's helping to clarify it. Auxiliary verbs help to clarify whether an action occurs, when the action of the main verb takes place, who or what is responsible for that action, and whether we are making a statement or asking a question. Explore what auxiliary verbs are and how they are used in English. 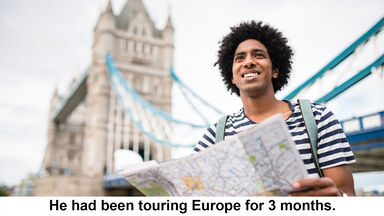 What Is an Auxiliary Verb?

Auxiliary Verbs Be, Do, and Have

Modal verbs are a special class of auxiliary verbs used to express conditionality, necessity, obligation, ability, and wishful desire. The modal verbs in English are:

Past and Future Progressive Tense

We also use past and future progressives to explain what was or will be happening when some other event occurred or will occur.

Here, "was" is the auxiliary that helps us understand when the main verb (watch) happened.

The future progressive actually uses two auxiliary verbs (will and be) to tell us that this action (drive) takes place in the future.

However, any sentence can be made passive by adding a form of be. A passive sentence looks like:

Here are some examples of passive voice:

Notice you could easily add "by a purple monster" to the end of your verb phrase and still have a grammatically correct sentence.

There's nothing grammatically wrong with passive voice; it's an excellent use of the verb "be." It's just not very exciting writing. It's more interesting to say:

The perfect tenses in English explain the order of things:

All the perfect tenses use at least one auxiliary verb, "have."

The future perfect also uses "will."

And the progressive perfect tenses also use "be."

In many languages, changing a statement to a question is as easy as changing your inflection or punctuation. In Spanish, for example, you can say, "Ella habla Inglés," or you can ask, "¿Ella habla Inglés?" The word order does not change. In English, however, the statement is, "She speaks English," whereas the question changes to, "Does she speak English?" English questions almost always use an auxiliary verb.

A dummy verb is a verb we use in place of a main verb. Usually we use dummy verbs when we've already used the main verb once or twice, and we don't want to repeat it. For example, if someone asks you, "Do you know the muffin man?" you don't want to respond, "Yes, I know the muffin man." It's too long and unnecessary a response when you can simply say, "Yes I do." In this case, "do" is the dummy verb replacing the main verb "know."

Or perhaps your wife tells her friend, "My husband wants to help you move your heavy furniture." You can respond with a simple "Do I?"

We also use auxiliary verbs in tag questions, which are short questions added to the end of a statement. If the statement is negative, the tag question is affirmative, and vice versa.

Auxiliary verbs have different uses in English. Auxiliary verbs are helpful in writing. With your verb knowledge on fire, check out some action verb examples.