When it comes to the parts of speech, nouns and verbs are among the best known and intuitively understood. However, there are complications worth discussing, as things aren't always as straightforward as you might expect. Keep reading for the definition of compound verbs and examples of the four different types of compound verbs. 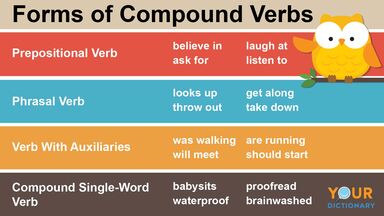 What Is a Compound Verb?

A compound verb is made up of one or more words. They’re sometimes called serial verbs because one verb follows another. You’ll often find compound verbs that share a subject, such as in these examples.

Compound verbs are formed in several ways. You can add a preposition in prepositional verbs, make a phrase with a phrasal verb, add a "helping" verb in a verb with auxiliaries, and make a phrase or combine two words together into a compound single-word verb. Each of these results in a different form of compound verb.

When a verb combines with an adverb, the result is a phrasal verb. Words like up, in, out, and down are common adverbs in phrasal verbs, even though they can also be used as prepositions in other contexts. Unlike prepositional verbs, phrasal verbs are idiomatic and aren’t translated literally.

Some examples of phrasal verbs include:

Greater Than the Sum

Compound verbs give the reader a bigger understanding of the action taken by the subject of the sentence. Now that you've familiarized yourself with the different forms of compound verbs, why not explore some other types of compounds in the English language? Learn more about compound subjects and compound nouns to elevate your command of the language.