There are a total of 12 English verb tenses. This can make it difficult for students and ESL learners to use verbs correctly. Simple definitions and examples of the different tenses can help you make sense of using verbs properly. 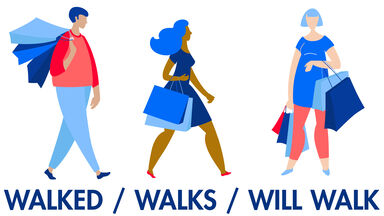 The simplest place to start in learning about verb tenses is to explore the three main types of verbs: past, present, and future.

Verb tenses can change the entire meaning of sentences, so it’s important to get them right. Take a look at this verb tense chart to see the past, present, and future tenses of over 100 regular verbs.

A past tense verb is a word that tells you what the subject has already done. Just as the name implies, you use it to describe something that happened in the past.

For example, “He walked to the store.” uses the past tense version of “walk” and tells you that “he” already made it to the store on foot.

A present tense verb is an action word that tells you what the subject is doing right now, in the present.

For example, “He walks to the store.” uses the present tense of the verb “walk” and tells you “he” is in the process of getting to the store on foot now.

A future tense verb is a word that tells you an action that will take place at some point, but hasn’t happened yet.

For example, “He will walk to the store.” uses the future tense of the verb “walk” and tells you that “he” plans to go to the store on foot, but hasn’t started the journey yet.

The three main verb tenses can each be further broken down to include the four aspects of verb tenses: simple, progressive, perfect, and perfect progressive. The most predominant tense is the simple tense.

The simple past tense describes a single event in the past without reference to any other past action. Use this only for singular events.

The simple past uses the second forms of verbs. This is the first tense in which the dreaded irregular verb comes into play.

Examples of Simple Past Tense Verbs

Notice that the time periods and actions being discussed are all finished in the past. Also notice that not all the verbs end in "-ed." For irregular verbs like "took," "met," and "quit," you have to learn their unique conjugations.

Simple present tense is used when the action being described is habitual or constant. These are the standard forms of verbs you see.

Each verb typically receives an "s" at the end. Notice how singular third person verbs change.

The simple future tense only describes a single event that has yet to occur. The simple future is just like the other simple tenses. If you understand the simple past and present, this one will be a breeze. When you use this tense, add a helping verb before the verb.

The most popular helping verb for the simple future tense is "will." A good rule of thumb is to use "will" when the future event is a promise or a prediction.

The progressive tense indicates an ongoing (or progressing) action. That action may be progressing in the past tense, the present tense, or the future tense.

Notice how, no matter the tense, each verb is indicating a continuous action. The castle didn't just shine for a second in the moonlight. It "was shining" continuously.

The perfect tense indicates an action that has been completed or perfected. The action may have been completed in the past tense, the present tense, or the future tense.

Notice how each scenario, whether it's past, present or future, is indicating the task or action has come to completion. Even if we're discussing a future time, we're discussing a time in which the action will have been completed. In all cases, a version of "to have" is used as a helping verb.

Verbs can take on a combination of both the perfect and progressive forms. The tenses are combined because they're indicating a completed or soon-to-be completed event (perfect tense) that was, is, or will be ongoing (progressive).

Notice how each action has been finalized, but it was an ongoing affair. In all cases, a version of "to have" and "been" are used.

He was continuously traveling in the past, but he’s done now.

The cooking is continuous and soon-to-be-completed.

The traveling is complete, but it was ongoing for a six-month period of time.

Verb tenses are intentional and deliberate to direct the focus of the sentence and define the time in which something happened. This helps avoid confusion during communication. Now you have the basics under your belt, if you're ready to test your tenses, see if you can master these verb tense worksheets and verb games.