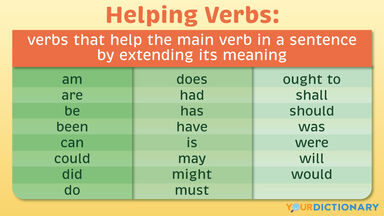 Helping verbs that add meaning to the clause where they are being used are called auxiliary verbs. This usage is so common that the terms helping verb and auxiliary verb are often used interchangeably. This type of helping verb is used to express tense or add emphasis.

The three most common auxiliary verbs are "to be," "to have" and "to do." Each of these types has multiple forms:

The words "be," "do" and "have" can be either standalone or auxiliary verbs. These words are functioning as auxiliary verbs if they are teamed with other verbs to complete a verb phrase. The following sentences include examples of auxiliary verbs. In each sentence, the auxiliary verb is bold and the verb it is helping is underlined.

There are a number of modal verbs in the English language. Modal verbs do not change form.

Modal verbs help to show obligation, possibility or necessity in a sentence. The following sentences include examples of modal helping verbs. In each sample sentence, the modal verb is bold and the verb the modal verb is helping is underlined.

The continuous tenses are often described as progressive rather than continuous.

Now that you know what helping verbs are, it's also important to keep in mind that the verb phrase in a sentence should not include more than three helping verbs. When used properly, helping verbs perform some of the most intricate work in English verb phrases. The more complex aspects, progressive and perfect, should be approached by writers who already have an advanced understanding of English sentence structure. Helping verbs should be studied after a solid foundation of simple verbs has been achieved. If you need to review a bit before tackling these tenses, go back and explore the basics of verbs.