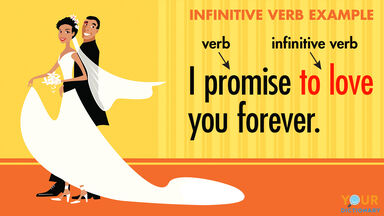 An infinitive verb is essentially the base form of a verb with the word "to" in front of it. When you use an infinitive verb, the "to" is a part of the verb. It is not acting as a preposition in this case.

Some examples of infinitive verbs include:

Infinitives are never conjugated with -ed or -ing at the end because they are not used as verbs in a sentence. They’re one of the three types of verbals, which are verbs used as an adjective, noun or adverb. The other verbals are gerunds and participles.

Infinitive Verb vs. Base Verb

Infinitives include the basic (unconjugated) form of a verb, but they don’t function the same way. The most basic form of a verb is the base form. The base form is just the verb, without the "to." You’ll see verbs in their basic forms in the dictionary, but not in written sentences that require conjugation.

Base forms of verbs include:

You can use infinitives in several ways. Because they function as nouns, adjectives and adverbs, they can appear almost anywhere. Now that you can spot an infinitive, take a look at the various ways they pop up in the English language.

Object of a Sentence

The most common way to use infinitive verbs is as a direct object or an indirect object. When the subject performs an action, the infinitive can answer the question “What?” as the object of that action.

Examples of the above infinitives used as direct include:

You can use infinitive verbs after adjectives to clarify meaning. Adjectives that include the words “too” or “enough” require infinitives to fill in the rest of the meaning.

Subject of a Sentence

Even though they’re grammatically correct, these sentences sound a bit awkward. You’re better off changing these subjects to gerunds, which are -ing words that function as nouns (for example: “Being an astronaut is my dream.” or “Sleeping before the flight is a good idea.”)

You’ve seen more infinitives than you think in your everyday reading. Take a look at these sentences to find common verbs that precede infinitives.