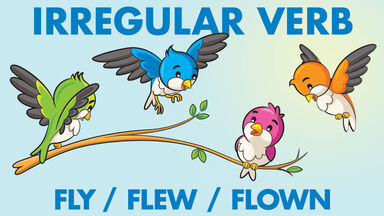 Irregular verbs are an interesting branch of the English language tree. Just when you got the hang of past and present participles, irregular verbs enter the scene. These verbs don't follow the simple rules of conjugation, such as turning walk into walked. Instead, they are irregular, so arise turns into arose and arisen. View a list of irregular verbs you might use in everyday conversation.

In the printable irregular verb list below, you'll find an alphabetical list of 89 verbs whose past tense and past participle forms do not end in -ed. Since these verbs don't follow standard rules, keeping a list handy can be really useful.

When it comes to an irregular verb list, you have three distinct columns. This includes the base form, past tense and past participle. See what each different part means.

The first column contains the base form of the verb. The base form is the verb in its purest form — not present, past or continuous tense, and not even infinitive (meaning there is no "to" preceding it). It's just the verb, plain and simple. It serves as the foundation on which you conjugate the verb into all its different tenses and forms.

The second column contains the verb in its past tense form. This is the form you use when you talk about something that happened in the past — just one event, not relative to any other event. Since these words are irregular, you'll notice they don't have the common -ed at the end like regular verbs. See a few examples at play.

We can also use the past participle as an adjective.

Practice Is the Name of the Game

The irregular verb list contains the most common irregular verbs used in American English. So, if you concentrate on learning this list, you'll be well on your way to mastering these tricky verbs. And, once you're familiar with the list of irregular verbs, feel free to take on any of these verb games.