Linking Verbs: Basic List and How to Identify Them

Linking verbs don't function in the same way as typical verbs in showing action, so it can sometimes be tricky to recognize them. Review a list of linking verbs so you will be able to recognize words that always function as this type of verb and those that can serve as either linking or action verbs. 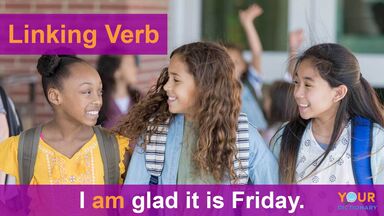 linking verb example I am glad it is Friday
Advertisement

What Are Linking Verbs?

Linking verbs are sometimes described as performing the function of an equal sign because they provide the connection between the subject of a sentence and a certain state. This type of verb:

Linking verbs can be referred to as copulas or copular verbs.

Words That Are True Linking Verbs

Basic Forms of "to Be"

The many forms of to be are linking verbs.

Forms of "to Become"

The various forms of to become are linking verbs.

Forms of "to Seem"

Forms of to seem also function as linking verbs.

Any time you see the words or phrases above, you know they are performing a linking or connective function in showing a relationship or describing a state.

Substitute the linking verb "are" for the word "looked" in both sentences. The first sentence still makes sense: "The flowers are wilted." The second sentence, however, would not make sense with that substitution: "She are for wildflowers."

Download and save or print the list of linking verbs below for a resource that you can keep handy. Just click the image for access to the PDF file. Use this guide to printables if you need assistance with the file.

Use Examples to Teach Linking Verbs

It’s so important for students to start mastering proper verb usage early in their language arts education. Whether you are teaching upper elementary, middle school or ESL students, you’ll need to cover this topic as part of your verb lesson plans. Help students learn how to distinguish this verb type by incorporating these examples of linking verbs into your lesson plans.