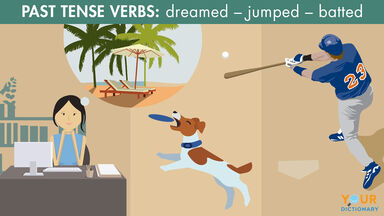 Past Tense Charts for Regular and Irregular Verbs

Regular verbs follow a predictable, traditional pattern when conjugating into other verb tenses. There are three patterns you can use when writing a verb in past tense.

There are some exceptions to these rules, such as verbs that end in -c (add a -ked in past tense like picnicked or panicked), but for the most part, you conjugate all regular verbs in these three ways. Refer to the 21-page downloadable PDF document below when double-checking your spelling and conjugation.

A great way to understand verb conjugation is to read them in the context of a sentence. Each example sentence below demonstrates the present tense, past tense and future tense of the same word. Notice how they follow the three rules listed above.

While regular verbs follow a standard conjugation pattern, irregular verbs are a series of exceptions. The only way to know how to conjugate a given irregular verb is to memorize the variations. Study these irregular verbs in the downloadable PDF format below, including their corresponding past tense and past participle forms.

Although these past tense verb charts have covered a number of different verbs and their tenses, there are thousands of verbs in the English language. If you are not sure what word to use, double check the definition of the verb and review its past tense forms. Take a look at another verbs chart that includes singular and plural verbs for subject-verb agreement.