Past Tense Verbs: Forms and Use

Understanding how to form past tense verbs correctly doesn't have to be a difficult task. With a few exceptions, English verbs follow reliable rules that you can learn to describe events that have already happened. You'll know how to use the past forms of the verbs, including past perfect, past progressive and past perfect progressive, in no time! 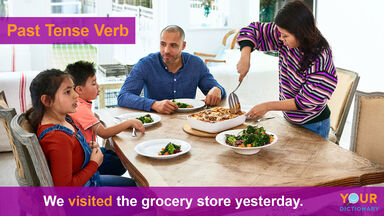 The English language has three basic tenses: past, present and future. Past tense verbs describe activities, actions, states or beings that have already happened.

Examples of past tense verbs include:

"Visited" is a simple past tense verb. It describes an action that has already happened.

"Were driving" is a past progressive tense verb that describes a previous action which took place over a period of time.

"Had said" is a past perfect tense verb that describes speech that happened before some other point in the past.

“Had been studying” is a past perfect progressive verb that describes the act of studying, which had happened continuously in the past, but is over now.

To construct a past tense verb, the first question you must answer is whether the verb is regular or irregular. Regular verbs typically follow a set pattern when conjugated in the past tense. Irregular verbs, however, require a bit more understanding.

Most verbs are regular verbs. Depending on the letters and vowel sounds in a verb, you add different letters to the end. Follow this pattern to see if you need to add -d, -ed or change letters completely.

Even though irregular verbs sound like they are rare, some irregular verbs are the most common words in the English language. For example, be, do, and have are all irregular and require different past tense conjugations. The verbs themselves may change (be to was, do to did), but past progressive, past perfect and past perfect progressive still use “have” and “have been.”

The best way to learn irregular verb conjugation is to memorize the different forms with lots of reading. For quick reference, have a list of irregular verbs handy in case you need to look one up.

Unlike many other languages, especially Romance languages, English does not usually have separate imperative or interrogative verb forms. Instead, questions or commands are indicated with changes in word order and punctuation.

Just like other verb tenses, the past tense verb depends on the rest of the sentence in a question. It helps the reader know what time period you’re talking about and whether or not the action is still occurring. Learning English requires learning about sentence structure and context clues just as much as specific verb conjugation.

It’s All in the Past

Once you know how to write verbs in the correct tense, you’ll help your readers understand more about what you’re trying to say. But the road to perfect grammar doesn’t end here! Check out these seven common verb tense mistakes before you start writing. You can also learn more about conjugating verbs in any tense with these examples of conjugated verbs.