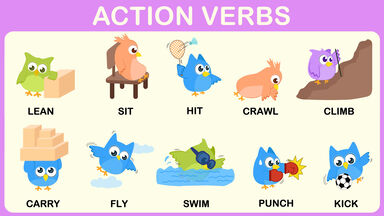 Since verbs are all about action, use fun classroom games that get kids up and moving! These games are perfect for elementary students and easily adapted for older learners. Make sure you have enough space to get the learning moving.

Using a list of verbs on the wall or on individual handouts, one student selects a verb to use in the first line in a story. They choose another student to create the next line using one of the verbs on the list. The game keeps going until the list is through. For extra fun, make sure the verbs are especially zany!

Have each student in the class write down three or four action verbs on a scrap of paper (or make your own list). Collect all the papers, split the class into two teams, and have one student from the first team pick a verb out of a box. They have one minute to act it out. If their team guesses correctly, they choose another verb and act it out until the minute runs out. Then it’s the next team’s turn!

Write a noun or pronoun on the whiteboard. Set your class into four lines (“trains”). Whisper a verb to the first student in each line (the “conductor”) and a pronoun or noun to the last student (the “caboose”). The conductor verbally passes the verb down their lines.

The last student in the line determines how to correctly conjugate the verb according to the noun or pronoun they’ve been told. They whisper it back up the line, and the first “conductor” who has the correct answer scores a point for their train. Rotate the first student to the back of the line and try it again.

Younger learners may enjoy a creative, hands-on game that encourages them to choose the correct part of speech. Fill a kiddie pool (or make a masking tape circle on the carpet) with paper fish. Each fish should have a word written on it. For beginners, put nouns on half the fish and verbs on the other half; older learners can have fish with examples of all eight parts of speech. If it’s not a verb, they have to “throw it back.”

Choose an item to be your “potato” (e.g. a beach ball, a stuffed animal, a small pillow). Play some fun music and have the class either pass the “potato” around a circle or at their desks. Stop the music; the student holding the item has to name a verb. If they can’t think of one that hasn’t been said before, they’re out. For an extra challenge, have students list one verb per letter of the alphabet.

Using paper and a bold marker (big enough that all students sitting at their desks can see the words clearly), write several sentences with one word on a separate piece of paper. Mix up the papers, group them by sentence, and have each student take a word. (Each sentence is one round of the game).

Tell students to organize themselves in a sentence in a line in front of the class, holding their papers out for their classmates to see. Then say to your students, "If you are holding the verb, jump for joy (or perform the verb)." This is a great chance for your students to begin a discussion of what a verb is and how it functions in the sentence.

Have students write verbs on scrap paper or make your own list. Divide the class into small groups and have each student choose one verb from a box. The group must work together to write a short story that uses every verb they’ve selected. At the end, they share their stories and the class votes for their favorite. (To make the game more challenging, increase the number of verbs that groups must use.)

You need a blackboard, chalk, and two fly swatters for this verb game. Break the room up into two teams. Make three big boxes (about 2'x2') and inside of them, write "helping," "action," and "linking," which are the three kinds of verbs.

For each turn of SWAT, have two students (one from each team) come up to the board. Have them each hold a fly swatter in hand. Then, read aloud one of your sentences. Their job is to swat at the correct box as soon as possible, identifying correctly whether the verb is a helping, action, or linking verb. The team with the most correct swats wins!

On the front of an index card, write a sentence and underline a verb in that sentence. Repeat this preparation with several more sentences and cards. On the back of each card, write whether the underlined verb is a linking, helping, or action verb.

If a student gets the answer right, they keep the card; if they do not, they can put the card under the deck. The students with the most cards at the end of the game wins. These kinds of verb games are for two students to play, and they ensure that students get a lot of individual practice while learning about verbs.

Take these ideas and adapt the games for the students in your classroom so that they are appropriate for their age and learning limitations. For more engaging language arts ideas, check out a list of grammar games that are great for any age. You can also bring in noun games or adjective games when your students are ready for the next step.