What Is a Conjugated Verb?

If you've ever taken a second language class, you've heard a lot about conjugated verbs and verb conjugations. In short, a conjugated verb is a verb that has been altered from its base form; but, as with all things grammar-related, it's a little more complicated than that. Let's take a look at how verbs are conjugated and the different things they communicate when they are. 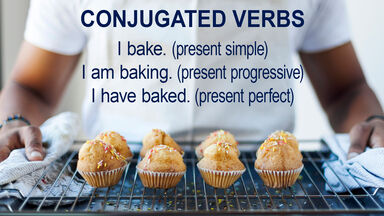 Conjugated verbs are verbs which have been changed to communicate one or more of the following: person, number, gender, tense, aspect, mood, or voice. Those will be explained in detail in just a moment: but first, here's an example of the irregular verb "break" conjugated in several different ways.

Present tense tells us what is happening at the current moment. There are three main present tenses: present simple, present progressive (continuous), and present perfect.

Past tense indicates that an action has already occurred, and is no longer occurring. Past simple, past progressive, and past perfect are the main past tenses.

Future tenses tell us that something will happen in the future. The main future tenses are future simple, future progressive, and future perfect.

As you can see, each different conjugation changes "break" from its base form to tell us when and by whom the action takes place. Conjugated verbs give us a lot of information!

A verb conjugation can communicate a lot of detail about a verb. When a verb is conjugated properly, it can tell us:

Conjugated verbs also tell us about the sentence’s mood and voice, which is important for reader comprehension. Take a look at the different ways conjugated verbs help writers communicate.

It's a bit redundant in English because we almost always state a subject explicitly in our sentences, but still, our conjugated verbs often go with specific subjects. For example, "am" is a present tense conjugation of the verb "be," and it is the form that goes with the subject "I." Using "I" (or "we") also indicates that the speaker is speaking in first person as opposed to second person ("you") or third person ("he," "she," "it," "they").

It is clearer in other languages, but conjugated verbs in English can also sometimes tell us something about how many people are participating in the action of the verb. This is called subject-verb agreement.

For example, singular subjects (he, she, it) in the present simple tense have an "s" added to them when conjugated:

English is a little tricky here because "you" can be singular or plural, but in other languages, the differentiation between singular and plural subjects is very clear in the conjugated verb endings.

In some languages, though not English, conjugated verbs can indicate the gender of the subject. Languages that use gender in their conjugation include Russian, Tamil, Arabic, Hebrew, and Bantu languages. Romance languages, such as Spanish, French and Italian, use grammatical gender in their nouns but not their verb conjugations.

Examples of different aspects include:

The action is the same, but the conjugation lets us know whether the baking is still happening or has already happened. Present, past and future tenses each have four possible aspects.

The sentence mood is like the purpose of the sentence in which a verb is used. The stative (or indicative) mood, for example, is used to make a statement. The interrogative mood is for questions, and the conditional mood is for sentences that pose possible scenarios and the outcomes that depend on them. The imperative mood gives commands or instructions, and the subjunctive mood creates hypothetical situations.

Know How to Conjugate Verbs