What Is a Finite Verb? Meaning and Examples

You may already know that a sentence needs a subject and a verb to be complete. But why does that verb need to be finite, and what’s the difference between finite and non-finite verbs? Keep reading to find the meanings and examples of both types of verbs, and why you’ll never mistake them again. 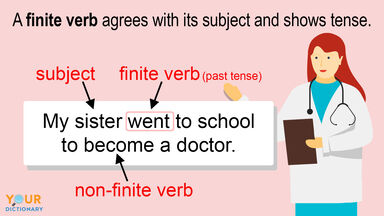 Every sentence must have a finite verb – even sentences that are not in the present or past tenses. Finite verbs can stand alone in a sentence or as part of a verb phrase. If there is more than one verb in the sentence, the finite verb is usually the one closest to the subject.

It’s easier to find finite verbs in a sentence than it seems. No matter how long or short the sentence is, there is always at least one finite verb.

The rest of the sentence depends on the finite verb. Finite verbs can be action verbs or helping verbs. They can appear in both dependent and independent clauses, as long as they have a subject, agree with that subject, and are set in either present or past tense.

Sentences can (and usually do) include both finite and non-finite verbs.

Basically, if a word ends in -ing, comes after “to,” or follows a finite verb in a verb phrase, it’s a non-finite verb. These verbs are important when filling out the larger picture of a sentence, but not in establishing subject or present vs. past tense.

Verbs such as will, would, shall, should, might, must, ought to, could, and can are known as modal auxiliary verbs. Modal verbs do not change their tense, but when they are in a sentence, they are the finite verbs. There are no non-finite forms of modals because they are not parts of verb phrases.

It may seem odd that modal verbs are actually finite verbs. Keep in mind that the verbs that follow modal verbs are known as bare infinitives – infinitives without the word “to” but that are still used as an infinite would be. Modal verbs can be used in several sentence moods, including indicative, subjunctive, and conditional sentences, but are always finite verbs whenever they appear.

Get Your Verbs to Work for You

Choosing the right finite verb can set the whole tone of your sentence. Whether you’re working on finite or non-finite verbs, it’s important to know how to conjugate them correctly. Review these rules for conjugating verbs based on subject-verb agreement, verb tense and aspect, and sentence mood.