What Is a Verb? Explanation, Usage, and Examples

Jumping, eating, sneezing, and sleeping are all verbs you likely perform in a single day, though hopefully not at the same time (that could get messy). While most verbs show the action in a sentence, some verbs are a little harder to spot. However, every sentence needs one — or it’s not a sentence at all. 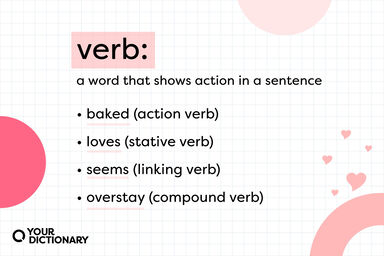 What Is a Verb?

Verbs are words that show action in a sentence. Just like nouns and adjectives, they’re one of the eight parts of speech.

A printable chart of the nine types of verbs can help you keep them and their functions straight.

Examples of Verbs in a Sentence

Verbs are the first part of a sentence predicate, and often the first word after a noun or pronoun. For example:

The 9 Types of Verbs

With all the jobs verbs have, it’s not surprising that there is more than one type. In fact, there are nine types of verbs — and understanding them can help you make your writing more interesting.

Action verbs describe actions that someone can do or demonstrate. Most verbs are action verbs. Typically, action verbs follow nouns or pronouns in a sentence.

Examples of action verbs include:

Stative verbs describe a position or state of being that you can’t see, but exists anyway. While they don't perform any visible action, notice that they're typically followed by a direct object.

Most verbs are regular verbs — verbs that only add -d or -ed in their past tense form.

Verbs that change form in the past tense are irregular verbs.

Transitive verbs express an action and are followed by a direct object. They “transfer” their action to another noun (underlined). Many transitive verbs don’t make sense without an object.

Intransitive verbs express an action, but they aren’t followed by an object. However, they can be followed by a phrase.

Some verbs (such as clean or read) can take transitive or intransitive meanings, depending on the context in the sentence.

Examples of linking verbs include:

Auxiliary verbs, also known as helping verbs, help the main verb of the sentence (known as a participle) by extending its meaning. You’ll see them in verb phrases where one verb doesn’t form a complete thought, or in perfect verb tenses.

Modal verbs are auxiliary verbs that show possibility or necessity. They always accompany other action verbs.

Compound verbs can be one or two words long, or they can be hyphenated.

Phrasal verbs are a type of compound verb that end with a preposition. They’re often difficult to directly translate to different languages because they’re English idioms.

Take Action and Review Your Verbs

Review and practice are two important verbs that can help you with the rest of your grammar. Work on verbs (and go even further) with several review activities and games.