Apostrophes are like grenades: You should only use them if you really, really know how. Since you’re much more likely to run into an apostrophe in your daily life than a grenade (hopefully), it’s best to master the apostrophe rules before you hurt an innocent sentence. And good news: There are only two that you need to remember. 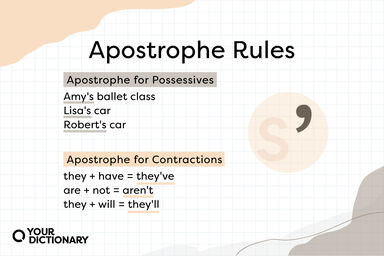 What Is an Apostrophe?

An apostrophe (pronounced ah-pah-stroh-fee) is a small punctuation mark near the top of a line of writing ('). Apostrophes look like single quotation marks, but they’re used alone rather than in pairs.

Apostrophes mainly indicate that letters have been omitted, or they show a noun’s possession. Occasionally, they can show that a single letter or number is plural.

Examples of Apostrophes in a Sentence

Apostrophes appear in lots of different words, especially in informal writing. It’s not uncommon to see two or more apostrophes in the same sentence.

How To Use an Apostrophe To Omit Letters

The first main function of apostrophes is to replace missing letters in a word. These words are either contractions or shortened versions of other words.

Use an Apostrophe To Create Contractions

Contractions are combinations of two other words in informal writing. Most contractions combine the words have, will, would, are, is, and not with other words.

Use an Apostrophe To Shorten Other Words

When you shorten other words in written dialect or casual writing, the apostrophe can replace those missing letters as well.

How To Use an Apostrophe for Possession

The next main function of an apostrophe is showing possession, but it’s actually just an extension of the “omitting letters” function. Writers used to show possession by adding -es to the end of a noun, long before spelling conventions made -es a plural noun form.

When a singular noun has possession over another noun (such as Mom’s hat or the boy’s dog), add an apostrophe + “S” to the end of the noun. The same goes for collective nouns and plural nouns that don’t end in “S.”

Use Only an Apostrophe With Plural Nouns That End in “S”

When the noun is plural and already ends in “S,” just add the apostrophe at the end.

Use an Apostrophe With Singular Nouns That End in “S” (Sometimes)

It’s the age-old question: Should you add apostrophe + “S” to singular words that already end in “S” (such as James, cactus, or dress), or just an apostrophe?

The answer is that both solutions are correct. It depends on your style guide and your personal preference.

The only exception is for words that are the same in singular and plural forms, such as scissors or Mercedes. Add only an apostrophe after these words, since adding another “S” would result in an incorrect pronunciation (such as scissors’s becoming scissorses, which is not a word).

Use an Apostrophe When Two Nouns Own Something

What happens when two nouns possess the same thing? Add an apostrophe + “S” to only the second noun if they both own the exact same item.

However, if each noun owns their own version of the same item, then add an apostrophe + “S” to each noun (and make their items plural).

How To Use an Apostrophe for Plural Letters and Numbers

You may also see apostrophes when a writer is describing plural lowercase letters or numbers. This is the only situation where apostrophes can show plurals, and it’s only to prevent confusion — though some style guides, including APA style, do not advise using apostrophes in this way.

One of the most common grammatical errors involves mixing up its and it’s. Its (no apostrophe) shows possession, and it’s (with an apostrophe) is a contraction for it is.

Why Is It Called an “Apostrophe”?

The term apostrophe is a big word for such a little punctuation mark — and it doesn’t initially come from grammar. Derived from the Greek apostrephein, meaning “to turn away,” apostrophe was initially a literary device in which a character makes a speech to someone who isn’t present (thus “turning away” from the scene).

The punctuation definition of apostrophe comes from the absent nature of the audience of these speeches. Just like the person a character is speaking to, the letter replaced by an apostrophe isn’t there.

Tips for Remembering Your Apostrophes