After politics and religion, the most controversial topic in conversation might be this: Do you put one or two spaces after your period? Only one of these methods is generally accepted today, and depending on when you learned to type, you may not like which one it is. 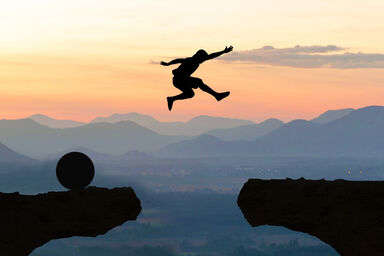 It's One Space — Period

Unfortunately for two-space fans, popular publishing standards have moved toward a one-space preference. Both the Chicago Manual of Style and AP Stylebook state that one space should follow a period, and MLA and APA Styles indicate that one space is preferable unless an instructor states otherwise.

If you're not convinced, open any book published in the last few decades. You won't find more than a single space after a period in any of them.

So Why Did We Use Two Spaces?

If you learned to type on a typewriter or word processor, using one space may seem sloppy. The double tap tap of the spacebar after you finish a sentence probably feels like second nature. And when you learned to type, that was true! But like many aspects of our daily lives, computers have changed everything.

Back when typewriters were the norm in offices and classrooms, they used monospaced typefaces. The mechanics of a typewriter required each letter to take up the same amount of space. For example, an "i" and an "m" were the same length, which required a bit of extra space on either side of the "i."

That made sentences difficult to read, especially because these extra spaces could look like actual spaces between two words. To compensate for this issue, typists learned to include two spaces after a period. That way, the delineation between sentences was clear.

Why We Moved to One Space

With the introduction of the personal computer in the 1980s, proportional typefaces began to replace monospaced typefaces. Now each letter had a proportional amount of space, meaning that an "i" took up less space than an "m." The industry standard shifted away from two spaces after a period as the new typefaces became more and more popular.

Which One Is More Readable?

While the publishing world may be on the side of the one-spacers, science seems to agree with the two-spacers. A 2018 study concluded that text processing was slightly faster when a writer used two spaces between sentences. While extra spacing didn't seem to affect comprehension, the study nonetheless provided more traditional writers some evidence for their positions (or at least some support in grammar arguments).

Examples of One Space vs. Two Spaces

If all this debate seems too abstract to you, consider how one space vs. two spaces look in a sentence.

If these sentences don't seem too different for you, try reading when there's more of them in a row.

Just like writing, reading one versus two spaces depends on when you were taught to type. One-spacers likely experience a harder pause when they read the second passage, while two-spacers may feel that the first passage provides no pause at all between sentences.

Most readers who were born in the 1980s and beyond are used to reading and using one space after a period. If you insist on using two spaces after your period, beware: This practice may age you more than sitting in the sun without sunscreen! Changing this writing habit may help younger generations connect with your writing more comfortably.

But if You Can't Give Up That Extra Space

However, if your thumb insists on plugging two spaces between every sentence, there's an easy solution. Add all the extra spaces you want while you're writing, but when you're done, do a quick find-and-replace search to exchange your two-space pairs with single spaces. That should make both you and your readers happy!