Colons, semicolons, and dashes are perhaps the three most misunderstood punctuation marks in the English language. Each of these is used to indicate a pause or break in a sentence. In some instances, these punctuation marks are not interchangeable. In other instances, it's up to the discretion of the writer. Let's take a deep dive into each of these pause-makers and see which one will suit your next line of prose. 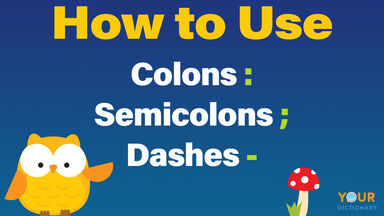 how to use colons semicolons dashes
Advertisement

We use colons in writing for five things:

How to Properly Use a Semicolon (;)

If you have a list, and some or all of the items in the list have commas in them, then separating the items with additional commas is just terribly confusing. Separate them with semicolons instead to avoid any ambiguity.

Also, if you have two independent clauses that each include several commas, you can join them with a semicolon and a conjunction.

Dashes look like hyphens, just longer, right? While the two might look similar, they function in different ways. Hyphens join words together while dashes separate words. There are two types of dashes to choose from: the em dash and the en dash.

How to Use the Em Dash

Another way to look at em dashes is an alternative option to both commas and parentheses. They, too, can be used in pairs to insert a clause. Here are examples with em dashes used in this way:

So, the primary function of the em dash is to cause a strong break in a sentence. For example:

Depending on your settings, if you're writing in Microsoft Word and type a hyphen twice, it will turn it into an em dash. This allows readers to read your bit of text with a more severe pause. Alternatively, you can select an em dash from the "Symbols" drop-down menu.

The em dash is about the length of a lower case "m," hence its name. Guess which letter of the keyboard an en dash spans?

How to Use the En Dash

The lesser-known en dash is about the width of a lowercase letter "n," which is why it's named the way it is. An en dash falls somewhere between a hyphen and the stronger em dash. The en dash literally means "through" and is often used in place of the words "to" and "till." That's why en dashes are frequently used with dates and numbers. It is used as a mark of separation. For example:

Hyphens don't have a space between words, but there's an exception to the rule known as the hanging hyphen. But, even then, a hanging hyphen will only have one space after it (and none before it). This sounds technical, but hanging hyphens are somewhat rare. Here's an example:

A Note on Dashes and Spacing

As a general rule, hyphens aren't separated by spaces while dashes are. However, when a section of writing requires a dash, always refer to the style guide you're using.

So, that's the dash. It's an interrupter, a pause-maker, a separator. Its function is so important, it's worth a quick glance through your style guide.

The thing one must be careful about with regard to any punctuation mark is that you should use it sparingly. Writing that is filled with colons tends to look overly formal, and too many semicolons come off as pretentious An excess of dashes makes a story feel choppy.

Try to vary the types of punctuation marks you use; it will make your writing clearer and more lively. If you stick to these 6 Basic Punctuation Rules, you'll be on the road to a neat and tidy writing carer!