Without commas, words run together and make it difficult to understand the writer's message. But when should you use a comma? Is there a comma before or after “but”? Check out these comma rules to learn when to use a comma, when you shouldn’t and when it depends on your writing style. 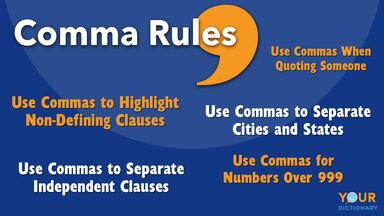 1. Use Commas to Separate Independent Clauses

When you're writing a simple sentence, you're using only one independent clause. These sentences don't require commas.

However, when you add another independent clause with a coordinating conjunction (for, and, nor, but, or, yet, so), separate them with a comma.

These clauses have the same level of importance, and both are essential to the sentence. Without a comma, your sentence is a run-on.

2. Use Commas After Introductory Clauses and Phrases

Introductory clauses and phrases are groups of words that come before an independent clause in a sentence. When you start a sentence with a dependent clause, you follow it with a comma (just like that sentence!).

If you add these phrases to the end of the sentence, they don’t require commas. For example, “The dog barked at me to scare me away” doesn’t need a comma to separate the infinitive phrase from the rest of the sentence.

3. Use Commas After Introductory Adverbs and Mild Interjections

You also need to add a comma after a conjunctive adverb, such as anyway, nevertheless or however. Commas also follow yes and no in the same context. Examples of sentences with introductory conjunctive adverbs include:

Finally, if you’re starting a sentence with a mild interjection, you need to include a comma. (For stronger interjections, use an exclamation point.)

Unless you’re starting a sentence with an independent clause, it’s safe to assume that you need a comma. Otherwise, it’s difficult to know when your introductory clause or phrase ends and the rest of your sentence begins.

4. Don’t Use Commas Instead of Conjunctions

Commas are powerful, but they can’t function in the same way as conjunctions. Using a comma instead of a conjunction is known as a comma splice, and it’s a common grammatical error. It looks like this:

Adding the proper conjunctions to these sentences can fix comma splices. You can also make them two individual sentences by turning the comma into a period.

5. Use Commas to Highlight Non-Defining Clauses

Non-defining clauses add more details about a noun in a sentence, but they’re not essential. The sentence still makes sense when you remove them. Use commas to separate non-defining relative clauses from the rest of your sentence.

You also need to add commas around appositive phrases, which function like relative clauses but don’t include relative pronouns.

If you’re using a person’s name as an appositive (such as in My cousin’s friend Mark loves cars), you don’t always need to add commas. However, adding commas around non-defining clauses is a good way to clarify your meaning (My cousin’s friend, Mark, loves cars). It’s a style choice.

6. Don’t Use Commas Within Clauses and Phrases

It’s difficult to understand where the emphasis is when there are unnecessary commas in a sentence. Be sure that your comma usage doesn’t break up important thoughts.

7. Use Commas to Separate Items in a Series

When you’re writing a list of nouns, verbs, or any other part of speech, you’ll need to include commas to separate them. The same goes for a list of phrases and clauses.

The final comma in these series is known as the Oxford or serial comma. Many people consider it correct to include the Oxford comma between the final two items in a list. Others include the comma in longer lists, but not in simple lists of three. The choice depends on personal preference and your style guide. However, you should always use an Oxford comma if it prevents confusion.

8. Use Commas to Separate Coordinate Adjectives

When two adjectives describe the same noun, they’re known as coordinate adjectives. You should separate these adjectives with a comma.

If a sentence has more than three coordinate adjectives (such as “The big, scary, and slobbering dog barked at me,” you can decide whether you want to use an Oxford comma. You can also omit the “and” for stylistic purposes, depending on your preference.

9. Use Commas When Quoting Someone

Use a comma when you’re quoting someone or when a character is speaking in dialogue. When the quote comes first in the sentence, put the comma inside the quotation marks.

Note that this rule primarily applies to American English. In British writing conventions, commas (and periods) go outside the quotation marks.

10. Use Commas to Address Someone Directly

No matter where you put their names in the sentence, the comma follows. It indicates to the reader that you’re speaking directly to that person.

11. Use Commas When Indicating Negation

Commas are important when you’re adding a negative point to a complete sentence.

You can also use commas when the addition isn’t necessarily negative, but different. For example, “Mark loves cars, maybe more than trucks” should still include a comma.

12. Use Commas to Separate Cities and States

When listing a city and state in an address, add a comma to separate the two. The same rule applies for cities in countries that don’t have states.

Include the comma whether you’re addressing the front of an envelope or referencing a city within a sentence. It’s especially important if more than one city shares the same name (such as Paris, France and Paris, Texas).

13. Use Commas for Dates

As for dates, a comma is required between the day of the month and the year. American dates follow the month/day/year pattern.

When you’re including dates in a sentence, you need to add commas after the year, as well as after the day of the week.

Unlike American dates, the European date pattern follows day/month/year (13 December 2009). Notice that when writing dates in this way, no comma is needed.

Large numbers also require a comma. Add a comma after every third digit from the right.

15. Use Commas in Letter Salutations and Closings

In the salutation of a letter, a comma is needed after the person's name. This rule is true for both written letters and emails.

If you're writing a formal business letter, you might substitute a colon (:) for the comma in the greeting. However, if you’re writing an informal letter or email, you might use an exclamation mark. Closings also use a comma.

Less formal communication may include an exclamation mark instead of a comma, such as “Thanks a bunch!” or “Can’t wait to see you!” It depends on the person receiving the letter or email.

If you can master these comma rules, your writing will be neater, clearer and perfectly acceptable to English teachers and grammar purists everywhere. You may also find that you understand more complex texts once you know how grammar rules work. For more practice with commas, check out these eight times that commas were important.