Ah, the comma- one of the most confused grammatical tools of all time. There are so many ways you can go wrong with the comma: serial commas, comma splices, commas and conjunctions. Who isn't confused by a comma: this winking grammar tool, this half-a-semicolon, subscripted apostrophe! You may be convinced that the comma was invented purely to plague English students everywhere? Fortunately, these simple comma rules should help clear things up and eliminate confusion. 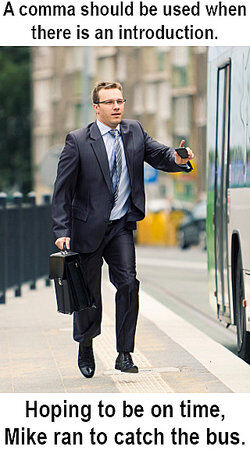 What the Heck Is a Serial Comma Anyway?

Commas are used to separate items on a list when you have 3 or more items. Seems simple enough, right… wrong! There are some caveats to this comma rule. For example, a list usually has an "and" somewhere in it:

So, if you have to use items to separate commas in a list, do you use a comma before that and or not? The answer depends on whether you want to use serial commas or not.

The Associated Press Style guide used by newspaper reports everywhere says a big No to serial commas, but The Chicago Manual of Style disagrees. With all the confusion, this is one situation where you usually can't go wrong, no matter what you do. Good thing, because there are lots of other strict rules for comma usage, so at least this is one less rule to remember.

a comma clearly does not belong. On the other hand, if I said

the comma is optional and it would not be incorrect. The difference is that "and watched TV" can't stand by itself, but "Mary watched TV" could.

Finally, with all these unclear situations, here is an easy one… If you have an introduction, a comma should be used to set it off (Much like in this very sentence).For example, if I said:

The point of this sentence is that Mike ran to catch the bus. The fact that he was hoping to be on time just introduces that main thought.

Knowing about the comma isn't unnecessary info, but if you do decide to include some elements that aren't essential to the sentence, such as an example, you need to offset it with commas. There are a lot of fancy words to describe this unnecessary info, such as appositives or parenthetical elements, but all these grammar terms boil down to the fact that if the meaning of the sentence would remain the same without the info, the info needs to be surrounded by commas. For example:

The point of this sentence is that my father is smart. The fact that he's a teacher is nice to know, but it isn't necessary information for the point I'm making here.

This unnecessary info could come anywhere in the sentence, including at the end, such as this example:

Regardless of the placement of the unnecessary info, the commas are necessary so don't forget them!

It's a Matter of Degree

If you use a number of adjectives to describe something, you sometimes have to put commas between them. Whether or not a comma is required depends on the weight of the adjective. Adjectives are, in order: Number, quality, size, age, color, origin, and type.So, if you say you have ten large books, you do not need a comma since ten is a number and large is a size. The adjectives are of the same weight or degree. If, on the other hand, you say you have a shiny, sparkling ring, you will need to put commas between them since shiny and sparkly both describe the quality of the ring.Well there are some other rules for commas as well, these are the basic elements that should get you well on your way to befriending the comma.