How and When To Use Brackets in Grammar [ ]

Brackets are more than just square-shaped parentheses. In fact, not all brackets are shaped like squares — some are curly, others are angled, and they’re all useful in their own ways. Even though you may not use these punctuation marks every day, you should still know what they mean when you see them. 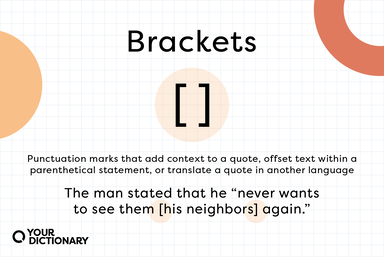 definition of bracket symbol with example sentence from the article
Advertisement

Brackets are punctuation marks that go around text. Like parentheses, brackets function in pairs — one bracket opens the text, and the second bracket closes it [like this].

There are three main types of brackets that you’ll see in writing. You may even see reference to rounded brackets — those are your standard parentheses. But when you hear just the word bracket, people are generally referring to square brackets.

Examples of Brackets in a Sentence

Although brackets aren’t as common as parentheses, they’re still quite useful and necessary in many situations.

How To Type a Bracket

Brackets appeared on the typewriter after parentheses, but they’re actually easier to type on a modern computer than parentheses are (you create parentheses with Shift + 9 and 0).

When To Use Brackets

You’re most likely to see and use brackets when dealing with quoted text. Whether you’re adding context to a quote, offsetting text within a parenthetical statement, or translating a quote in another language, brackets add clarity to your writing.

Use Brackets To Add Important Words to Quotes

Writers use brackets in academic writing to add information to a quote without changing the meaning of the sentence. This means that the writer can add words, if necessary, to make the sentence clearer or add a correction or comment to quoted material.

If you’re adding words to clarify a word that’s already in the quote, don’t replace that word with your brackets — remember, you can’t change quotes. You can only add to them.

Use Brackets To Add Editorial Changes

Square brackets allow a writer or editor to fix mistakes within a quote, add explanatory information, change a quote to fit in a sentence, or add emphasis to a word through bold or italics.

Use Brackets Inside Parentheses

When you’re referencing a book or another written work, add the date of publication in brackets — especially if the book has more than one edition.

Use Brackets To Show Quoted Errors

Sometimes quotes contain spelling mistakes and grammatical errors. They may drive editors crazy — but because you can’t change quoted text, those mistakes have to remain.

Editors and writers often use the Latin word sic (meaning “so” or “thus”) to indicate an error was part of the original quote, and they didn’t make the mistake in restating it. Sic is usually italicized and appears inside brackets just after the error.

Use Brackets in Translations

When you’re quoting another language, add the English translation in brackets.

Other Types of Brackets

There are a few different types of symbols that can technically be considered brackets. Each pair of marks has its own rules for academic use.

Parentheses or Round Brackets ( )

The most commonly used brackets in English are parentheses. These round brackets add extra (usually non-essential) information to a sentence, or they cite sources.

Angled brackets, also known as chevrons, aren’t common in modern writing. The most common use for angled brackets outside of computer programming is for setting off URLs in text or works cited pages.

Braces, or curly brackets, are mostly used for math, computer programming, or music. An exception to this would be if a writer wanted to create a list of items that are all equal choices. Otherwise, this punctuation mark would not be used in academic writing.

What About Brackets in Math?

Brackets also appear in math equations, where they work similarly as in writing — brackets group parts of the equation and set them off from other parts. But unlike grammar usage where brackets go inside parentheses, math usage puts brackets on the outside and parentheses on the inside.

You’ll also see curly brackets more often in math than in grammar, as they indicate numbers are in a set. (For example: {1,3,5,7,11} are prime numbers)

Tips for Using Brackets vs. Parentheses

Still need some help when deciding between brackets and parentheses? Ask yourself these questions before choosing rounded or square punctuation marks.