Quotation marks are the only punctuation marks you can do with your fingers (insert “air quotes” here), which is possibly why they’re often used incorrectly. Quotation marks set off quotes, show dialogue, and can even add a sarcastic tone to your writing. You can keep the rules straight with a few tips and examples — and you can quote us on that. 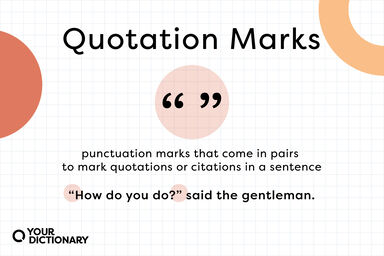 What Are Quotation Marks?

Also known as inverted commas, speech marks, quote marks, or just quotes, quotation marks always appear in pairs. There’s never a time when you use one quotation mark without the other.

Examples of Quotation Marks in a Sentence

Quotation marks appear where the author needs to set quoted words apart from the rest of the sentence.

Depending on what you’re reading or writing, you may see both curly quotes or straight quotes. Curly quotation marks curve toward the text they’re enclosing, while straight quotes go straight up and down.

All quotation marks used to be curly before the invention of the typewriter, which introduced straight quotes as a matter of function. Today, the quote marks on your keyboard are probably straight, but your word processor program can format them as curly (depending on the font you’re writing in).

There are definitely some times when quotation marks are necessary for a reader’s understanding. However, these times aren’t as often — or as random — as you may think.

Use Quotation Marks To Quote Someone

Any time you’re writing words that someone else said, you need to put them between quotation marks. It tells the reader, “I didn’t write this part — someone else did.” This rule applies in research papers with formal citations, gossipy emails about what that guy said, and everything in between.

Use Quotation Marks in Dialogue

Characters in stories like to talk. Quotation marks around dialogue let an author separate a character’s words from the rest of the narration, so readers can visualize the conversation on the page.

Use Quotation Marks When Referring to Short Works

When you’re writing about short works or parts of a longer work, such as songs in an album, chapters in a book, or episodes of a television show, put the titles in quotation marks. Longer works are italicized, depending on the style guide you use (AP style puts quotation marks around all titles).

A more stylistic use of quotation marks can show an author’s skeptical or derisive tone. Sometimes known as scare quotes or sneer quotes, these quotation marks indicate that the word in question has a different meaning than it normally does.

(Use these sparingly; otherwise, your tone might be more sarcastic than you mean it to be.)

Quotation marks are helpful when introducing something technical or uncommon. Use them the first time you mention the new term, and then not again. Don't use quotation marks around technical terms that are commonly known.

Punctuation for a Quote

Ending a Sentence With a Quote

You can end your sentence with a quote or piece of dialogue. Any punctuation that comes at the end of the quote (such as periods, quotation marks, or question marks) stays inside the marks.

Beginning a Sentence With a Quote

When a sentence begins with a quote, place the punctuation inside the quotation marks before continuing the sentence. If there’s no end punctuation, use a comma.

If you have a sentence where another type of punctuation mark (such as a dash, colon, or semicolon) follows a quote, it goes outside the quotation mark.

If your quoted text is a complete sentence (or multiple sentences), capitalize the first letter, regardless of where you put the quote within the larger sentence.

When the quote is a fragment or part of the sentence it’s in, you don’t need to capitalize it.

Can You Use Quotation Marks for Emphasis?

Style guides and editors are torn on whether quotation marks are effective ways to emphasize text. Those who support this usage argue that quotation marks make a word or phrase more visible, just like italicizing or underlining it.

But those against quotation marks for emphasis say that it’s too easy to misuse them in this way, especially because quotation marks can also show sarcasm or non-literal meaning. Just imagine someone saying these statements with air quotes, and determine whether they seem genuine or not.

What About Single Quotation Marks?

Think of quotation marks as oven mitts, and the words between them as a very hot platter of cookies. You need an oven mitt on either side or you’ll be burned. That goes for the little punctuation cookies too — they’re hot!