Hyphens join related words together in a sentence, such as in father-in-law, five-year-old and sugar-free. They prevent misunderstandings and clarify writing. But when should you use a hyphen — and is a hyphen the same thing as a dash? Find out when a hyphen is necessary, when it’s optional, and when you don’t need one at all. 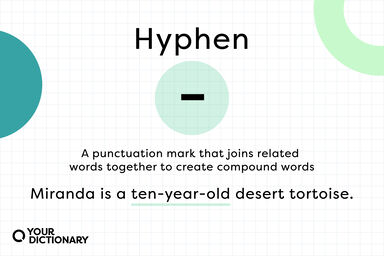 Hyphen symbol with definition and example from article underneath
Advertisement

What Is a Hyphen?

Hyphens can also indicate when a word is cut off, either at the end of a line or because someone stops speaking abruptly. (“Have you seen the pineapple mons-”)

Are Hyphens and Dashes the Same Thing?

Combining two words makes a completely different word known as a compound word. Most compound words don’t need a hyphen, but in some cases, they do. For example:

Examples of Hyphens in a Sentence

Most of the time, adding affixes to a word doesn’t require a hyphen. In some cases, however, it’s a good idea to hyphenate the prefix or suffix to its base word, including:

Examples of these hyphen rules in a sentence include:

How To Type a Hyphen

You’ll want to use a hyphen in a few additional situations. Compound numbers (numbers 21-99) and fractions always require hyphens when written out. It’s also a good idea to include a hyphen when the unhyphenated version of the word is a completely different word (such as prefix, as in “a word placed in front of another” and pre-fix, as in “before a fix”). For example:

Examples of these hyphen rules in sentences include:

When To Use a Hyphen

It seems like using a hyphen is often the safe choice in writing. Generally, that’s true — although there are a few times when you shouldn’t use hyphens. These occasions include:

Hyphenate Compound Modifiers (Before the Noun)

Many people confuse hyphens and dashes because they look similar in printing. However, they serve very different purposes.

The common rule of thumb is to use a dash when showing a break in the text, a range in dates or time. Use a hyphen to create a connection between two words.

When compound words include a noun that’s three syllables (or longer), adding a suffix may confuse the reader. Add a hyphen to clarify the meaning in these words.

These noun phrases usually have a non-principal word, such as an article or preposition, between two other words. The rule also applies to nouns with equal status (such as singer-songwriter).

Hyphenate Some Prefixes and Suffixes

Nine times out of ten, adding a prefix to a word doesn’t require a hyphen. But that tenth time always requires a hyphen — especially if the prefix is self-, ex-, or all-. (Add co- to the list when you’re talking about a profession.)

The suffixes -elect-, -odd, -free, and -style are also always hyphenated, no matter where they appear in a sentence.

Add hyphens between any prefix that comes before a proper noun or proper adjective.

Sometimes, a prefix or suffix shares a letter with the noun it’s attached to. In these cases, a hyphen can eliminate any misunderstanding or misspelling.

Hyphenate Between Affixes and Words to Avoid Confusion

There’s a big difference between the homographs resign and re-sign — one means “to quit,” the other means “to sign again.” Luckily, we have hyphens to help differentiate between words that use the same affixes but mean very different things.

When writing out numbers, hyphenate compound numbers between 21 and 99. (Don’t use a hyphen for higher numbers.)

You should also hyphenate fractions when writing them out, except for one half (no hyphen).

When Not To Use a Hyphen

So are there times when you shouldn’t use a hyphen? Believe it or not, you don’t need a hyphen in most cases — but you especially don’t need one in these cases.

Don’t use a hyphen:

What Does “Hyphen” Mean?

The word hyphen comes from the Greek words hypo- (“under”) and -hen (“one”). Put together, the Greek hyphen means “under one” or “together as one” — as in, connecting two separate words as one word.

Hyphens date all the way back to the second century B.C. when they were invented by Greek grammarian Dionysius Thrax. They connected compound words and, upon the invention of Johannes Gutenberg’s printing press, signaled that a word at the end of a typed line would continue on the line below.

The hyphen was one of the original punctuation marks included on a typewriter (which, coincidentally, used to be hyphenated as type-writer). Today, it remains as helpful as all the other punctuation marks, if not a bit underappreciated.

Hype Up for Hyphens

Hyphens can help you through all sorts of vocabulary vexations. But knowing the rules for hyphens is only the first part.