When Should Ages Be Hyphenated? The Years-Old Question

“You’re ten years old now!” you write in your nephew’s birthday card. Then you frown and change it to “You’re ten-years-old now!” But that doesn’t look quite right, either. The truth is, you do hyphenate ages when they’re written out — sometimes. It depends where they fall in the sentence. (Spoiler alert: You’re going to need another try on that birthday card.) 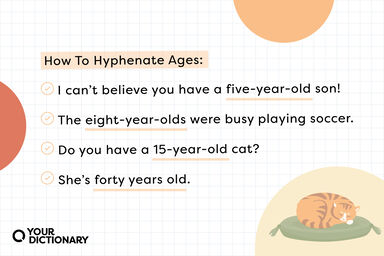 When Do You Hyphenate Ages?

So that’s the answer — hyphenate everything? Not quite.

Use Hyphens Before the Noun

Compound adjectives are typically hyphenated when they come before a noun. That’s the case with written-out ages, as well.

Note that if you change the word year, as in five-month-old son or fourteen-week-old girl, the rule still applies.

Use Hyphens When the Age Is a Noun

The other time to use a hyphen for ages is when the age functions as a compound noun, without any other noun to modify. (This use only works with people.)

Don’t Use Hyphens After the Noun

Now for the tricky part: You don’t use a hyphen if the age comes after the noun in a sentence. (Wait, that wasn’t too tricky.)

Also, change year to years if you’re describing an age higher than one year old.

If you can replace the whole age (She’s forty years old) with just the number of years (She’s forty), there’s no hyphen required.

Why Do You Need Hyphens?

Using a hyphen in a compound adjective or noun is a helpful way to clarify your meaning. Leaving the hyphen out can lead to confusing (though humorous) sentences.

Do You Still Hyphenate if the Age Isn’t Written Out?

Deciding whether you should write out a number depends on the style guide you’re using. However, because compound numbers (such as thirty-seven or ninety-two) are already hyphenated, you may choose to use their numerical forms instead — and you never want to write out numbers higher than 99.

Memory Tip: Look at the “Years”

Remember when we told you to change year to years if the compound adjective came after the noun? That’s about to come in handy.

If the age includes year old (“the thirteen-year-old cat”), go crazy with the hyphens. The only exception is when something is one year old — anything higher gets a hyphen.