There are 14 punctuation marks in English grammar, and at least one of them has to appear in every sentence. But how do you choose the right one, and how do you know if you're using it correctly? Follow these basic punctuation rules to write more clearly and effectively. 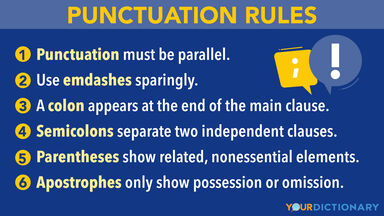 Punctuation Must be Parallel

The choice to use commas or dashes in this situation depends on your personal preference. As long as you use the same mark at the beginning and the end, it's correct. The parallel punctuation rule also means that you should not use a semicolon to set off just one item in a list. For example:

Semicolons are an effective way to separate list items that have commas in them. However, you need to either use them for every list item or don't use them at all.

Writers often use an emdash (the longest of the three dashes) to mark off information for emphasis. It's an effective way to shock the reader or to draw attention to important details. For example:

These sentences are both intriguing and clear for the reader to understand. However, emdashes must appear sparingly, or the effect is lost. Try to limit them to one per paragraph, or even one per page if possible.

A Colon Appears at the End of the Main Clause

If you have trouble deciding where to use a colon in your writing, ask yourself if a period or question mark would be appropriate in the same location. If the sentence is already complete, you may use a colon to add a list, elaboration or restatement.

A common grammar mistake is to place a colon between a preposition and its object (such as "Lemonade is made from: lemons, sugar and water"). Solve this problem by determining whether the text before the colon is a complete sentence. If it is, you're probably using the colon correctly. If not, determine a better place for the colon, or choose a different punctuation mark.

When you create compound sentences with coordinating conjunctions, you're joining two independent clauses. Semicolons can also join related independent clauses that are of equal importance, but each side of the semicolon must be a complete sentence. For example:

You could put a period in place of each of these semicolons and they would still be grammatically correct. The same rule applies when you use a semicolon before a conjunctive adverb joining two clauses (such as "The restaurant was very crowded; however, the waitress took our order immediately.")

Parentheses show elements in a sentence that are related but not necessary to understand the meaning of the sentence. If the information inside the parentheses forms a complete sentence within the larger sentence, no punctuation is necessary. For example:

When the information is more essential to the sentence, you can replace them with commas in most cases. (Just make sure to keep that parallel punctuation!)

Apostrophes Only Show Possession or Omission

If you see an apostrophe outside of these occasions, such as in plural nouns that are not possessive, you've probably found a grammatical error. Apostrophes have specific uses and shouldn't be included without a specific purpose.

Ellipses Only Indicate Omissions in Text or Pauses in Dialogue

Many writers like to use ellipses for effect. However, there are only two times when you can correctly use omissions:

If you find ellipses in your narration, you can safely replace them with other punctuation marks. And if you absolutely must include ellipses in other instances, strongly limit them to avoid slowing your pace.

When punctuating a quote, you almost always place the end punctuation mark inside the quotation marks. End punctuation includes periods, exclamation points, and periods. For example:

Even in the last example, where the statement's period is replaced by a comma, it's inside the quotation marks. You can only leave an exclamation mark or question mark outside the quotation if it's part of the sentence, not the quote. (For example: Who said "I'm not telling"?)

Only Use One Exclamation Mark at a Time

You have probably seen (or used) two exclamation marks to express excitement. While this notation is all right for texting, it's best to use only one at a time in most types of writing For example:

It's best to try and avoid exclamation marks altogether in formal academic writing. However, if you're writing a story or making an argumentative point that requires an emphasis, only use one exclamation mark.

Don't Use Hyphens for Adverbs Ending in -ly

When you form a compound adjective, you use a hyphen to connect an adverb to an adjective to accurately describe a noun. However, if that adverb ends in -ly, don't use a hyphen. For example:

Another adverb to avoid hyphenating is "very" (such as "a very respected man"). The rules change when the compound adjective follows the noun; typically, no hyphenation is required in these cases.

Hopefully, now you've got a better grasp on these basic punctuation rules. If they were new to you, your writing is sure to improve from this day forward. However, if these rules were on the easier side for you, check out more grammar rules you should definitely know before your next writing assignment.