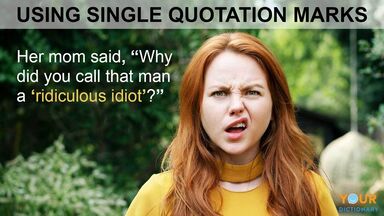 In standard United States punctuation rules, there are really only two answers to the question of when to use single quotation marks. One involves the more familiar double quotation marks, and the other has to do with headlines.

Rule 1: Quotations Within a Quotation

The most common use of the single quotation mark is when you're quoting someone within a quotation. You've probably seen this format used in different types of essays, books, interviews, and news stories.

Rule 2: Quotations Within a Headline

If you’re going to use single quotation marks, it’s important to know how to properly use punctuation with them.

Single quotes marks are also often commonly used to off a specific word in British usage, in the same way italics can be used. (I ‘truly’ cannot stand that woman.)

Single quote marks are also sometimes used in academic writing, though this isn’t considered a rule. Specialist terms that are unique to a subject are often enclosed in single quotation marks in both U.S. and British English. This is very common in specific disciplines, particularly philosophy or theology. If you're writing in a specific discipline, check with the style guidelines of the institution or publication for which you are writing to verify if you should use quotes in this way.