You know that a hyphen is a little line that makes brand-new words (like that). And you may even know that an em dash is a longer line that interrupts writers when they’re talking — like that. But is an en dash a thing? Should you be using it? And why do we need more than one type of dash, anyway? 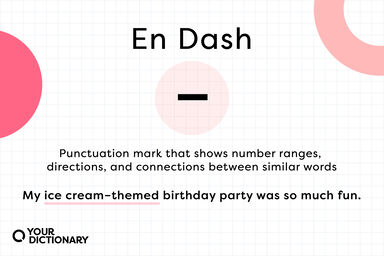 What Is an En Dash?

En dashes are longer than hyphens (-) and shorter than em dashes (—).

Examples of En Dashes in a Sentence

Seeing examples of en dashes in sentences can help you understand all that these punctuation marks do.

How To Type an En Dash

The first thing you need to know about using en dashes is how to type them. Depending on the computer and word processor you use, there are several shortcuts to creating en dashes.

Or if nothing else works, simply highlight this en dash (–), press Ctrl + C, then Ctrl + V to paste it where you want it.

When To Use an En Dash

You’ve probably seen en dashes in writing every day without realizing it, since they can easily be mistaken for another type of dash. But they do have a distinct purpose that is very different from a hyphen or an em dash.

Use an En Dash Between Spans or Ranges

An en dash can show ranges of numbers, including scores, votes, and dates, as well as words that represent dates (days of the week or months of the year). You don’t need to add spaces around the en dash in these cases.

The en dash replaces the prepositions from, to, and between. For example, you could say “We’re expecting between 60 to 70 guests at the wedding” or “Our store is open from Monday to Thursday” instead of using en dashes.

Use an En Dash To Show Directions

The en dash can also show connections between other words. When showing directions, an en dash replaces the word to.

Use an En Dash Instead of “Versus”

En dashes also replace the word versus when placed between opposing words.

Use an En Dash To Show Equal Relationship

Sometimes, you’ll see en dashes between words that aren’t opposed to each other, but equal in value or partnership.

Use an En Dash to Clarify Compound Adjectives

Editors may use an en dash when a compound adjective includes an open compound word, and hyphenating it would be confusing.

When Not To Use an En Dash

With all these en dashes uses, it’s hard to think of a time when you shouldn’t use them. But in American writing, it’s best not to use en dashes in a few key situations.

In British writing, you can use the en dash in place of the em dash when interrupting text or setting off nonessential clauses. Use a space on either side – like this – to be grammatically correct in the U.K.

Now that you’ve learned when to use an en dash, can you identify why an en dash belongs in each sentence?

See how well you did in the sentences above.

Dashes are supposed to make your life easier, not more confusing. If you find yourself dreading the dash in your writing, decide why you're using it. If you're replacing the words from, to, through, between, or versus, use the en dash. It's encouraging, enlightening, and enjoyable!