The em dash is like that friend at a party who grabs your shoulder and pulls you aside because she’s got something to tell you. That something could be very important or just sort of interesting, but either way, she’s got your attention. That’s how the em dash works — it interrupts a sentence to tell you something that the writer thinks you need to know. And if you use it correctly, the em dash can be your friend, instead of just an annoying interruption. 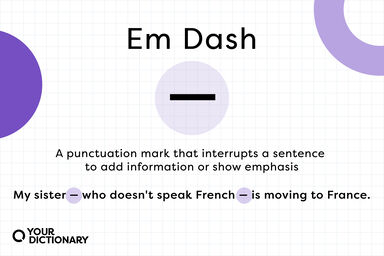 What Is an Em Dash?

An em dash (—) is a type of dash that interrupts a sentence to add information or show emphasis. It’s called an em dash because it’s as wide as the letter “M.”

An em is also a unit of measurement in typography. When you’re using a 12-point font, for example, that’s the width of your em dash — 12 points.

Examples of Em Dashes in a Sentence

Em dashes are a stylistic way to change your sentence variety, which makes your writing more interesting to read. They’re especially common in informal writing and published fiction.

How To Type an Em Dash

There are different ways to create an em dash on various devices and word processors.

You can also use auto-format in Microsoft Word to create an em dash. Write a word, then a hyphen (no space), then another word. Hit space — your hyphen should now be an em dash.

Do You Put Spaces Around an Em Dash?

If the above sentences look a bit, well, spacy to you, then you might be used to seeing em dashes with no spaces around them—like that. Both versions are correct, depending on your style guide.

If you’re using AP style, which is what most newspapers and magazines use, include spaces before and after your em dash (“Police Investigate Unlikely Robbery Suspect — the School Librarian”).

But if you’re using MLA format, Chicago Manual of Style, or APA stylebook, leave no space between words and em dashes (“Librarian Confesses to Theft—Claims ‘I Just Needed More Books’”).

When To Use an Em Dash

Em dashes create breaks in a sentence. That break might add important information, information that’s interesting but not really important, or just a dramatic pause to get your reader’s attention.

Use an Em Dash for Emphasis

Remember your friend from the party? This usage of the em dash is also grabbing your elbow for attention. Em dashes can replace periods or commas between clauses to add a bit of emphasis.

Use Em Dashes Around Nonessential Clauses

However, if you want the information to stand out more, use one em dash before the clause and another one after the clause.

Use an Em Dash To Add an Afterthought

Sometimes nonessential clauses come at the end of a sentence. They’re known as afterthoughts, and they can clarify another part of the sentence, answer a future question, or even ask a related question.

When adding an afterthought to a sentence, you don’t need a second em dash, since the end punctuation will end the sentence by itself.

Use an Em Dash in Place of a Colon or Semicolon

Like an em dash, a colon can “point” to a word or phrase in a sentence. If the two parts of the sentence aren’t closely related, you can use an em dash instead to add more emphasis.

Semicolons function by joining two independent clauses together. If you’d like to use an em dash instead (or you want to give more emphasis to the second clause), you can.

Use an Em Dash When Quoting Someone

Another way to use em dashes is after quoted text, just before the quote attribution (the person who said it).

“What barrier is there that love cannot break?” —Mahatma Gandhi

When Not To Use an Em Dash

Just like your party-interrupting friend, em dashes sometimes need boundaries. There are still a few times when you’re better off not using them, or using another punctuation mark instead.

Don’t use an em dash:

Which sentences use the em dash correctly?

Could you find the mistakes?

A Dash of Punctuation

The key to using em dashes is right there in the name. You only need a dash of them in your writing; otherwise, like that party friend, they’re going to get on people’s nerves. Think of them like exclamation points — they’re most effective when used sparingly.