How and When To Use a Period in Punctuation (.)

A period may just be a little dot at the end of your sentence, but it’s a lot more powerful than it looks. One single period punctuation mark can end an entire sentence, interrupt a complete thought, and even eliminate multiple letters from an abbreviation. But before you unleash these potent punctuation marks into your writing, you need to learn the rules of using periods — otherwise, they could cause more harm than good. 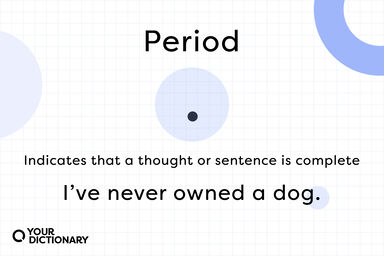 What Is a Period?

A period looks like a small dot on the bottom of a line (.), and it comes after the last letter in a sentence.

You can also use a period to abbreviate words and phrases.

When To Use a Period

Using a period seems pretty straightforward if you’re just thinking about sentences and abbreviations. But what kinds of sentences require periods, and why don’t you include periods in words like FBI or ASAP?

Use a Period To End a Statement

You can make these declarative sentences exclamatory by adding an exclamation point (Isabella doesn’t like pickles!), but that changes the tone of the sentence from calm and straightforward to excited, angry, or another strong emotion.

Use a Period To End a Request or Command

Periods also come at the end of imperative sentences, which make requests or give commands.

Imperative sentences can also contain exclamation points (Help me out of this chair!) if you want to add a sense of urgency to your words. But otherwise, these sentences are grammatically correct with a period.

Use a Period After an Indirect Question

Not every question is an interrogative sentence, which always ends in a question mark. Indirect questions are hidden inside statements — in which case, they end in a period.

Use a Period in Lowercase Abbreviations

Periods stand for omitted letters in abbreviations. When an abbreviation includes lowercase letters, it typically also includes periods. This rule includes most honorific titles, such as Mr. or Dr. (except in British English).

Use a Period When Abbreviating a Name

If someone abbreviates part of their name, use periods to indicate that some letters are missing from certain initials. The same rule applies for a period after a middle initial.

Use a Period When Abbreviating Degree Titles

When shortening the title of an academic or professional degree, use periods. Note that this rule can depend on the situation, so double-check with your style guide.

Should Periods Go Inside or Outside Parentheses?

When a parenthetical statement is non-essential, and falls in the middle of the sentence, no period is needed inside the parentheses.

But when the statement inside the parentheses is a full sentence and comes after the end punctuation of the sentence, it does need its own punctuation.

Do Periods Go Inside or Outside Quotation Marks?

When Not To Use a Period

Knowing when not to use a period can be just as important as knowing when one belongs. In some cases, an erroneous period can change the meaning of your entire sentence.

Don’t Use a Period to Break Up a Sentence

Some sentences feel like they need a pause right in the middle. But that doesn’t mean you need a period — in these cases, a comma (or no punctuation mark) is probably the right move.

Don’t Use a Period After Another Punctuation Mark

If your sentence ends with another punctuation mark, you don’t need to add a period to the end anymore.

Don’t Use a Period in Uppercase Abbreviations and Acronyms

When an abbreviation or an acronym contains all uppercase letters, it doesn’t usually include periods.

Don’t Use a Period in Most Scientific or Mathematical Abbreviations

Abbreviations for measurements, scientific terms, or math terms don’t need periods either. The only measurement that requires a period is in. for inch, because it looks like the word in otherwise.

Don’t Use Periods After Fragments in Bullet Points

When listing items in a bulleted list, you don’t need to use periods unless the items are all in complete sentences.

Because there are so many different ways to use periods, the number one rule is to use them consistently. Be sure you’re following proper punctuation rules when using periods and sentences, but when it comes to abbreviations, make sure you’re applying the same rule to each abbreviation in your writing.