Question marks ask questions. That’s it, right? The answer’s right there in their name. But questions are only one of a question mark’s jobs — and if you’ve ever thrown a “?” without words into a text message (or even a “?!”), you know it’s true. Question marks can express everything from confusion to panic. 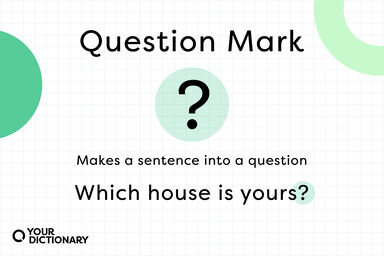 What Is a Question Mark?

A question mark, sometimes known as an interrogative mark, is a squiggly line over a period that makes a sentence into a question. They reflect the higher inflection of a spoken question (when your voice goes up as you ask something).

Examples of Question Marks in a Sentence

Like periods and exclamation points, question marks are end (or terminal) punctuation marks. You don’t need to put a period after a question mark — it ends the sentence all by itself.

To the average reader, the question mark looks a bit silly. It kind of looks like an “s” or a “q,” or even a curly exclamation mark. So where did this symbol come from?

One theory goes back to the Middle Ages, when people would indicate that their sentence was a question by writing the Latin word quaestio (“debate, question”) at the end. As that become a bit tiresome, they would write simply “qo,” which later became a “q” above an “o." Today, that “o” looks like a dot, and that “q” looks like a squiggly line.

There are a few more theories, including one that likens the question mark to the tail of a cat, and another that credits an advisor to Charlemagne with the punctus interrogativus. No one knows for sure — but that won’t stop us from using it properly.

What Do Question Marks Do?

The most important part about question marks isn’t how they look, but what they do. They answer questions, express different tones in a sentence, and can even make requests of others.

You use question marks at the end of direct questions, also known as interrogative sentences.

Direct questions begin with interrogative pronouns (such as what, who, whom, whose, and which) or interrogative adverbs (where, when, why, and how).

Indirect questions ask the same thing, but are phrased differently. They use periods instead of question marks, as in “Let me know what movie you’re seeing tonight.”

You can also use a question mark in different types of questions, including requests — depending on the structure of the sentence. Imperative sentences make requests and commands, but they only use periods or exclamation points.

Requests that end in question marks usually begin with a modal verb (such as will, may, could, or must). Their answers are usually “yes” or “no.”

Other “yes” or “no” questions can begin with auxiliary verbs (is, have, or do) instead of modal verbs.

Sometimes a question mark in a sentence just indicates a questioning tone, not an actual question that needs an answer. If you changed the question mark to a period or exclamation point, you wouldn’t need to change any of the wording, but the tone would be different.

You may even just see a question mark in parentheses (?) in the middle of a sentence. It expresses the same confused tone as it would at the end of the sentence, but to a specific word or clause. Multiple question marks just multiply the confusion.

Do Question Marks Go Inside Quotes?

Like all punctuation marks in American English, question marks go inside quotation marks — when they’re part of the quoted text.

But when the question mark belongs to the sentence, not the quote, it goes outside the quotation marks. Otherwise, it sounds like the quote is a question.

What Do Multiple Question Marks Mean?

When one question mark doesn’t express the urgency of your question, two or three might do it. Questions with multiple question marks have a slightly more panicked tone than standard questions (but don’t use them in formal writing).

You can achieve the same purpose with a question mark and exclamation point (Where are my keys?!), sometimes put together as an interrobang (‽).

What About Upside-Down (or Reverse) Question Marks?

In English, we use a question mark at the end of the sentence and hope that the interrogative pronoun, interrogative adverb, or helping verb will let the reader know that a question is coming.

But in Spanish, they use the extra step of the inverted, or upside-down question mark (¿) at the beginning of a sentence. It sets an inquisitive tone to the sentence right away, eliminating any misunderstandings. You don't need to worry about using inverted question marks unless you're writing in Spanish.

Is There a Question Mark for Sarcasm?

It's no longer in use, but the 21st century seems like a good time to bring it back — just think of all the online arguments and text misunderstandings a sarcastic question mark could clear up.

Don’t Question Yourself (Except in Actual Questions)

It’s great to question the world around you — especially if you’re using question marks properly. But don’t question your own understanding of writing conventions and how to use them. Learn all the tricks of punctuation and what they can do.