Semicolons are more than fancy commas or part of a winky-face emoticon. (That’s a ;) for anyone who doesn’t remember the time before emoji). They have a specific purpose in a sentence, and when used correctly, they can add a sophisticated flair to your writing. But be careful — if you use semicolons incorrectly or too often, they’re more annoying than fancy. 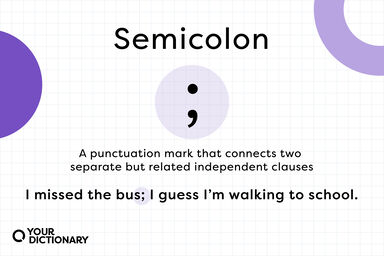 definition of semicolon symbol with example from the article
Advertisement

What Is a Semicolon?

A semicolon (;) is a punctuation mark that connects two separate but related thoughts. It looks like a colon (:), but instead of two dots on top of each other, a semicolon has a comma on the bottom. Semicolons indicate a longer pause than a comma provides in a sentence, but a shorter pause than a colon.

There’s one main semicolon rule: When used in a sentence, each side of the semicolon must include an independent clause (a full sentence). Otherwise, the sentence isn’t grammatically correct.

When two sentences are closely related, separating them with a period may seem too harsh. That’s where semicolons come in handy. You’ll usually find them in compound sentences, though skillful writers may use them in different sentence types.

When To Use a Semicolon

It may seem like semicolons appear in sentences randomly. But believe it or not, those semicolons are functioning properly (unless they really are random, in which case you’d probably want to choose something else to read). If you want a quick reminder of all that semicolons do, print out this handy chart.

The most common way to use a semicolon is to separate independent clauses. They can replace coordinating conjunctions (for, and, nor, but, or, yet, so) to connect two complete thoughts that are closely related.

Note that you never use coordinating conjunctions with semicolons. Use them separately — and if the sentence makes more sense with the conjunction, feel free to use it instead of the semicolon.

A comma splice is a common grammatical error where a comma is connecting two independent clauses, which it’s not supposed to do. An easy way to fix a comma splice is to make the comma into a semicolon (if the sentences are somewhat related).

You can also use semicolons instead of commas in serial lists with longer phrases (or phrases that already have commas) to avoid confusion.

Do You Capitalize After a Semicolon?

Now that you know how a semicolon works, what about the rest of the sentence? Should you capitalize the first letter after a semicolon?

The answer is no — most of the time. Just like with coordinating conjunctions, you’re making a brand new sentence with two parts. There’s no reason to capitalize the word after a semicolon unless it’s a proper noun.

Even though semicolons and colons share part of their name, they don’t function in the same way. Colons connect very strongly related ideas (usually part of the same sentence), or show emphasis to a second idea. Additionally, a colon can come before incomplete thoughts or even single words.

Notice another difference between semicolons and colons? You should capitalize the first letter after a colon if it’s an independent clause, according to AP and APA style guides.

Semicolons aren’t the only punctuation mark where usage gets a little fuzzy. Many writers replace semicolons with em dashes (—), particularly when they want to add emphasis to part of a sentence. Is that okay?

Remember the primary semicolon rule: They separate independent clauses. If you want to add a longer, more sudden pause to this separation, feel free to replace a semicolon with an em dash.

But that’s the only time when semicolons and em dashes are interchangeable. Using a semicolon instead of an em dash isn’t grammatically correct in any other context.

Semicolons and em dashes have one more thing in common: You shouldn’t use them too often. Lots of semicolons and/or em dashes on a page mean that you’re not actually varying your sentences that much, which is the whole point of using them in the first place.

Avoid using more than one or two semicolons or em dashes per page (and definitely never more than one per paragraph). Otherwise, they can get repetitive and annoying, rather than stylistic and purposeful.

When Was the Semicolon Invented?

Like many beautiful triumphs of humanity, the semicolon came about during the Italian Renaissance. It was created by 15th-century publisher Aldus Manutius, who paired the comma and colon on his printing press in Pietro Bembo’s Latin essay De Aetna.

The semicolon became popular throughout Europe due to its simplicity and function, outlasting many other Renaissance-era punctuation marks (including the sarcastic punctus percontativus, which we wish still existed).

Can you tell which sentences use semicolons correctly?

See if you spotted those sticky semicolons in the wrong places.