What Are the 16 Punctuation Marks in English Grammar?

You know your periods from your parentheses and your commas from your colons, but do you know the difference between braces and brackets? Do you really know how to use a semicolon, or do you just close your eyes and hope it works? In English, there are 16 punctuation marks — the period, question mark, exclamation point, comma, semicolon, colon, em dash, en dash, hyphen, parentheses, brackets, braces, apostrophe, double quotation marks, single quotation marks, and ellipsis — and they’re not as scary as they look. 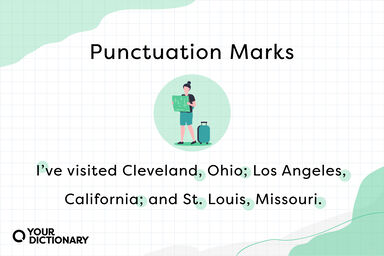 The period serves two purposes in grammar. When it appears at the end of a declarative sentence, it ends the sentence. The period can also indicate that a word is an abbreviation.

Exclamation points show a sudden outcry in writing. They also emphasize a point more strongly than a period.

Commas separate ideas or elements within the structure of a sentence. They also appear in numbers, dates, and letter writing after the salutation and closing.

Tip: The final comma in a list, known as an Oxford or serial comma, is optional. Some style guides prefer it, while others consider it unnecessary. An Oxford comma is always necessary when the sentence is confusing without it.

Semicolons connect independent clauses to show a closer relationship between the clauses than a period would. They can also separate items in a list that already include commas.

Colons introduce a quotation, an explanation, an example, or a series. They can also clarify information or emphasize an important word or phrase.

Em dashes set off information from the rest of the sentence. They can also show emphasis to a word or phrase. You can add spaces to either side of an em dash, depending on your style guide.

En dashes are shorter than em dashes, and they indicate a range or connection between numbers or words. You don’t need to use spaces on either side of an en dash.

Hyphens are even shorter than en dashes. They join two or more words together to make compound nouns, compound adjectives, and compound numbers.

Parentheses add further thoughts or qualifying remarks to a sentence. They separate these phrases from the rest of the sentence.

Braces contain sets of numerical or specialized information to show that they are considered as a unit. You won’t often see braces in writing, but you’ll see them around groups of numbers and mathematical expressions.

Apostrophes indicate the omission of a letter or letters from a word. They form contractions, show the possessive case, or create plurals of lowercase letters.

Quotation marks indicate the beginning and end of a quoted passage. They can also show dialogue in fiction.

Single quotation marks show quotes within a quotation, and they set off quotes in headlines.

An ellipsis indicates an omission of words or sentences. Students writing research papers or newspapers quoting parts of speeches will often employ ellipsis to avoid copying lengthy text that is not needed.

If you need a handy reference guide to the 16 punctuation marks, print or share the poster below.

There are a few differences between punctuation in British and American English. The following chart details some of those differences:

Knowing which punctuation mark is which is a good start. But now that you can tell your em dashes from your en dashes, you’re ready for the next challenge: avoiding common punctuation mistakes. Learn the basic punctuation rules to avoid embarrassing errors such as comma splices, hyphen misuse, and apostrophe placement (especially in your holiday cards).