To most of us, three dots in a row (...) represent that agonizing moment when someone is typing a reply to our text. Anything could happen — a declaration of love, heartbreaking news, or something in between. But those little dots, known as an ellipsis, have a bigger role than testing your patience. And unlike your text conversation, they won’t just disappear with no reply at all (the worst ever). 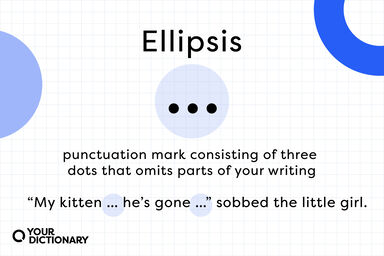 ellipsis symbol definition and example sentence from the article
Advertisement

An ellipsis (plural ellipses) is a punctuation mark that consists of three dots or periods (...) in writing. Also known as suspension points or even dot-dot-dot, ellipses appear in informal writing, news stories, and fiction.

Both ellipsis and ellipses come from the Greek élleipsis, meaning “falling short” or “omission” — which is what ellipses do. They omit parts of your writing.

Examples of Ellipses in Sentences

You’ll see ellipses in a variety of different sentences, but essentially, they always do the same thing: They replace missing text, whether it’s a word, a sentence, or several paragraphs.

How To Use Ellipses

Reporters and fiction writers tend to use ellipses more than academic writers. However, ellipses can be helpful in all three types of writing.

Use Ellipses for Omission in News Reports

For example, if a fire broke out and a fire chief gave the following quote, most of the quote would likely be considered unnecessary.

Readers get the same idea in a shorter amount of time with the second sentence. The newspaper saves valuable space for more information, and the readers don't need to spend time with unnecessary wording.

The same rule applies to formal writing, such as academic papers and published research, when a quote might be too long or clunky.

For example, a discussion of search and seizure might invoke part of the Fourth Amendment, but not all of it:

In fiction, an ellipsis can demonstrate a pause in dialogue or a character "trailing off" (stopping talking without finishing their sentence).

When Shouldn't You Use Ellipses?

An ellipsis can be a very effective punctuation tool. However, when ellipses are overused or used incorrectly, they can make writing feel plodding. Avoid using ellipses:

The main rule of ellipses is not to overuse them. When in doubt, find a different way to write your sentence to avoid the ellipsis unless you know exactly why you're using it.

Do You Put Spaces in Your Ellipses?

Ellipses can appear with or without spaces. It all depends on the style guide you’re using.

Many word processors will automatically format an ellipsis character if you type three periods in a row. However, if you use spaces, it won’t change the formatting.

One day, you may encounter a rare specimen: the four-dot ellipsis. Surely it’s a typo. Don’t ellipses always have three dots, not four?

That first dot isn’t part of the ellipsis — it’s the period for the complete sentence before it. In styles that space out ellipses, that period can look like a fourth dot.

You only need to worry about including a period before an ellipsis if the sentence before it is a full sentence, and you’re omitting part or all of the sentence after it. The same rule applies for sentences that end in an exclamation mark or question mark.

Ellipses in Texting and Social Media

21st-century ellipses may be even more significant than earlier versions. After all, ellipses take on many more meanings in text conversations and social media platforms, even beyond the dreaded waiting-to-reply ellipsis icon.

Adding an ellipsis to a standard reply could create a whole new emotional response, since it feels like there’s a “but” waiting afterward (or something even more sinister).

You may also see an ellipsis after a question (Are you coming to the party, or …) to add a slight tone of impatience or annoyance. And an ellipsis by itself could mean “I don’t get it” or “I’m speechless,” depending on the comment it’s responding to.