When to Use Exclamation Marks 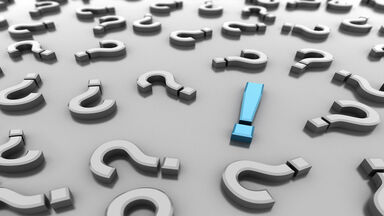 Any exclamatory sentence can be properly followed by an exclamation mark to add emphasis. After all, doesn't "I am excited!" convey more emotion than "I am excited."? If you use exclamation points sparingly throughout your paragraphs, they can bring a touch of excitement or emotion to your writing.

Exclamation points can affect the tone of a sentence in ways that a period can’t. Here are some more example sentences that use exclamation marks.

In formal writing, you include one exclamation mark at the end of a sentence. But in informal writing, such as emails or text messages, people often use more than one to emphasize their point. For example: "No!!! I told you metal can't go in the microwave!" certainly gets the point across and has a lot more impact as you run for the fire extinguisher.

Informally, exclamation points can also be used with question marks to express shock, protest or dismay. For example: "What do you mean you forgot the plane tickets?!?!?!?" Don’t add these punctuation marks to a formal essay, though, as they are definitely not proper writing conventions. Multiple exclamation points can also be mistaken for shouting, so use them wisely.

There is some dispute in regards to whether exclamation marks belong in formal writing at all. Most conventional grammar rules say that they don't belong, or at a minimum should be used sparingly. All sorts of arguments have been made against the exclamation point - everything from the fact that the writing should create its own emphasis to the belief that an exclamation mark will distract the reader.

History of the Exclamation Mark

Although exclamation marks were introduced into the English language in the 15th century, they did not even exist as a separate key on standard typewriters until the 1970s. (Perhaps people just weren't as excited back then!) Fortunately, exclamation marks now have a prominent place on computer keyboards on the number 1 key.

Exclamation marks make a sentence more exciting, emphatic or emotional. They serve a specific purpose when setting a sentence’s tone. But they’re not the only punctuation marks available to writers! Take a look at the 14 punctuation marks in English writing conventions that can help you express what you’re trying to say.