Why Are You Yelling? How All Caps Make You Loud

READING SOMETHING WRITTEN IN ALL CAPS CAN BE TOUGH. LIKE THIS, FOR INSTANCE. IT SEEMS LIKE I’M YELLING, DOESN’T IT? ISN’T THIS GETTING HARD TO READ?

Hopefully the point is clear: If you overuse all caps, people will have a hard time discerning where the emphasis should be in your writing — and they might just think you’re furious. A well-placed all caps word can help you make a point — but if you overdo it, you’ll just look like you left the caps lock on, or worse. So, how did WRITING LIKE THIS become associated with shouting, and when should you use all caps? 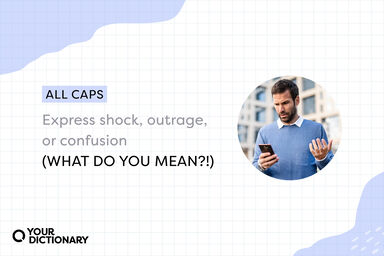 A Brief History of All Caps

All caps have actually been associated with loudness for much longer than text or computing have been around. In the Roman alphabet, all capital letters were actually the default until lower-case script came along in the 8th century A.D. Until this point, capital letters were called majuscule and conveyed majesty or grandeur. Since everything was handwritten in those times, a lower-case script called minuscule was created to make it easier to write more.

Fast forward several centuries to the invention of the printing press and eventually the typewriter when capital letters were widely used in newspapers, particularly in headlines, until roughly the 1950s. Cut to the computer age and the practice of using all caps began to take on a life of its own. Before the age of the internet, there were “usenet newsgroups” — a sort of proto-Reddit, if you will. In 1984, one user declared, “if it’s in caps i’m trying to YELL!” Another user called Dave Decot described using all caps:

There seem to be some conventions developing in the use of various emphasizers. There are three kinds of emphasis in use, in order of popularity: 1) using CAPITAL LETTERS to make words look 'louder'

Why All Caps Seem Loud

Most people seem to agree that all caps can read as shouting — and there are several potential reasons for this.

Studies have been conducted on how all caps affect readability and interpretation of a text. Lower-case writing is more familiar and the default, so our eyes glide over it more easily. The shapes of lowercase letters are more varied than uppercase script; this variety helps the brain recognize words more quickly. For example, some letters are tall (d, h, k, l), some are short (a, e, n, s), and some are descending (g y p q). All capital print doesn’t have the same variety, and as a result, has been shown to slow down reading speed.

They Take Up Space

One reason for all caps being a turn-off is they take up space. Like that one exceptionally loud person in a restaurant, you draw attention to yourself, but not necessarily in a good way. When someone is loud, you hear the loudness more than the nuance of what they are saying. Professor Paul Luna, director of the department of typography and graphic communication at the UK’s University of Reading, says, “All-caps in an email looks like shouting because when someone is shouting, you’re aware of the shout, and not the nuance….ALL-CAPS FILL THE SPACE, so there’s an element of feeling that the message is crowding out everything else.”

When and Why People Use All Caps

While all caps can be overused, they do serve a purpose, and when used sparingly can be quite effective. (Additionally, because there are no bold or italics features in texting or on most social platforms, all caps have become the default way to emphasize a word or point.)

If you overuse all caps, people won’t know what points are most important. If you use a highlighter to mark up a paper, the eye will instinctively move to the highlighted words. If the whole page is highlighted, then people won’t know where to look. It’s the same with all caps. A well-placed all capitalized word can help you make a point, but a wall of all caps text could turn your reader off completely.

While you’re taking a long hard look at your own use (or overuse) of all caps, check out these other stories that’ll help you stay up to date with the latest communication standards.