Why the Period in Your Text Makes Your Friends Nervous

Why would a period in your text make someone nervous? Imagine receiving the following text message: I’m leaving the office soon. See you tonight! You’re looking forward to a night out with your friend, so you write back what strikes you as a neutral response: Ok.

When you get to the restaurant, your friend is there — and she’s mad at you! “Ok?” she says. “OK, period?!” Was it something you said? Well, yes. 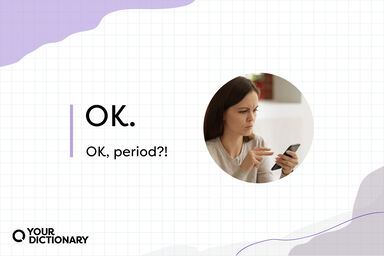 Texting Is Its Own Language

Texting is great in lots of ways — it’s convenient, quick, and spares you the annoyance of a phone call. It is not, however, a perfect method of communication. When we text, we’re missing out on the visual and auditory cues and expressions that in-person communications or a call might include. So the recipient is forced to guess your tone based on cues — and punctuation is one of the main ways they do that. A period or full stop is used to mark the end of an idea, so in texting a period can be like slamming a door in someone’s face — it implies that the conversation is closed.

How you punctuate or don’t punctuate your texts can change the whole tone and meaning. This is particularly true of short messages like “ok,” “thanks,” “yes,” “no,” etc. Using punctuation after these words can come across as passive-aggressive, depending on the question. Putting a period after “ok” in particular can make the recipient of the message feel like they’ve done something wrong.

Celia Klin, associate professor of psychology at Binghamton University, conducted a study on punctuation in text messaging. She states,

... what we have done with our incredible linguistic genius is found ways to insert that kind of emotional, interpersonal information into texting using what we have. And what we have is things like periods, emoticons, other kinds of punctuation. So people have repurposed the period to mean something else.

When it comes to texting, tone is key. While proper punctuation is typically crucial in written communication, texting has its own rules. In studies, people have shared their thoughts on using periods in texting. Some said it depends on the context, while others think that a period following messages like “ok” or “no” almost always conveys a negative message. In other words, tone is the main consideration.

For instance, if you are writing a longer, more serious text message, it is probably fine to use punctuation. However, if you are talking to a friend or partner, a period is not needed. Additionally, whether or not you use punctuation should depend on whether or not the message can be clearly understood without it, as is the case with one-word replies like “yes” and “ok.” For longer texts that use complete sentences, the use of punctuation typically has less impact on the message.

Another factor that affects how people view punctuation in text messages is the age of the texter/textee. For older generations who did not grow up with texting or the internet, putting a period at the end of a sentence is likely a given. However, those who had SMS texting for the majority or entirety of their adult lives may leave out punctuation as a rule. This is not always the case — there are many younger people who insist on proper punctuation and older generations who are up to date on all the latest texting practices — but keep it in mind if there’s a considerable age difference between yourself and the person you’re texting with.

Another source of confusion and debate amongst texters is ellipses. Ellipses indicate that there’s something left unsaid. This can be interpreted as either “there’s more information to come” or “I’m implying something.” For example:

This text is enough to strike fear into the hearts of the most hardened individuals. A period would be bad enough, but the ellipses let the recipient know that what’s to come is of great import, which makes the message even more nerve-wracking.

Context is everything: If you were to send a grocery list and end it with an ellipsis, the recipient would be less alarmed and more curious about what other items you need.

Whether you’re writing a novel-length message or a one-word reply, punctuation (or lack thereof) and tone matter. Review these punctuation rules so that you can always send the right message.