17 Words That Rhyme With Life (Plus Half Rhymes)

Finding exact rhymes for some words can be a bit challenging. While there are words that rhyme perfectly with "life," it can be hard to find just the right term when you need it. Discover several words that rhyme with life, along with a selection of half rhymes to consider. 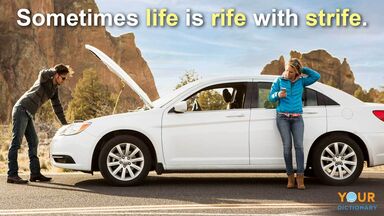 Words that rhyme perfectly with each other are usually called exact rhymes or perfect rhymes. Sometimes they are referred to as full rhymes or true rhymes. These are the perfect match rhymes for the word "life."

Half Rhymes for Life

Not all rhyming words are examples of exact rhymes. There are actually many other types of rhymes. Half rhymes are words in which the final consonant sound of two words are very similar to the original word, but the final vowel sounds are different. They are a special type of imperfect rhyme.

Now that you've explored perfect rhymes and half rhymes for the word "life," it's a great time to explore some of the unique writing challenges faced by poets and authors who write rhyming prose. Start by learning about some common rhyme scheme examples in poetry. From there, discover 20 essential poetry terms that every poet or student of poetry should know.