Words That (Nearly) Rhyme With Purple

A (very) few words have ending sounds identical to the word purple, but they are unusual words that aren't often used in everyday language. It's much more likely that you'll find a near rhyme for purple. Discover a selection of words that rhyme with purple so you're familiar with the available options. 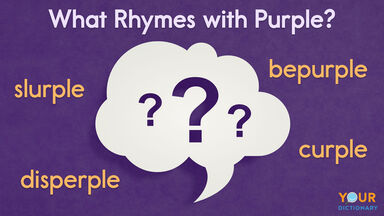 What Rhymes With Purple?

Only a few uncommon words form perfect end rhymes with the word purple. Learn what they are, along with what they mean so you'll be able to quickly tell if any of these scarce options might make sense in your writing. If they don't, the next step will be to consider near rhymes.

Near Rhymes for Purple

A near rhyme occurs when the ending sound of a word is similar to that of another term without being identical. This type of rhyme is also referred to as slant rhyme. Almost all available rhyming words for purple are that type of rhyme. Several letter combinations that appear at the end of terms work as slant rhymes for purple.

Purple Rhymes Ending With a Vowel Before an L

Some of the best slant rhymes for purple end with -al, -el, or -il. Many terms that end with this particular letter pairing pattern sound very similar to the end of the word purple when spoken.

While not many words end in -ple, the other options that end in -le can be good slant rhymes for purple. Be sure to consider words that end with - ble, -cle, -gle, -ile, -kle, and -tle when you're on the hunt for words that rhyme with purple.

Purple isn't the only word that can be challenging to rhyme with. It's not even the only color that lacks many perfect rhymes. To see for yourself, review some words that rhyme with orange. Next, explore some of the other types of rhymes, for even more creative ways you can work rhyme into your work even when exact sound matches are scarce or nonexistent.