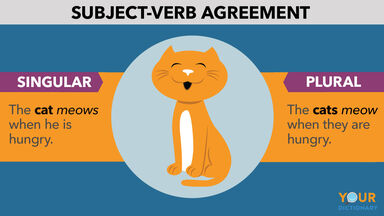 What Is Subject-Verb Agreement?

If you are interested in subject-verb agreement, you've come to the right place. However, before diving headfirst into the rules, it's good to have a little explanation. The subject and verb within a sentence need to agree with each other in number in order for a sentence to make sense.

What Are the Rules of Subject-Verb Agreement?

It might seem like subject-verb agreement has many rules, but you'll quickly notice that one ties into the next. In the end, it'll all make sense. To help clarify the examples of each rule, the subjects are in bold and verbs are in italics.

Subjects and verbs must agree in number. This is the cornerstone rule that forms the background of the concept. And, only the subject affects the verb! Nothing else matters.

Rule 2. Words Between Subject and Verb

Subordinate clauses and prepositional phrases that come between the subject and verb don't affect their agreement.

Rule 3. There or Here

When sentences start with "there" or "here," the subject will always be placed after the verb. Some care needs to be taken to identify each part correctly.

Rule 4. Subject After Verb in Questions

Subjects don't always come before verbs in questions. Make sure you accurately identify the subject before deciding on the proper verb form to use.

Rule 5. Joined by And

If two subjects are joined by "and," they typically require a plural verb form.

Rule 6. Two Subjects Separated by And

The verb is singular if the two subjects separated by "and" refer to the same person or thing as a whole.

If the word "each," "every" or "no" comes before the subject, the verb is singular.

If one subject is singular and the other is plural and the words are connected by the words "or," "nor," "neither/nor," "either/or," or "not only/but also," use the verb form of the subject that is nearest the verb.

The singular verb form is usually reserved for units of measurement or time.

Rule 11. Object of the Preposition

Indefinite pronouns typically take singular verbs. The exceptions to the rule include the pronouns "few," "many," "several," and "both." These always take the plural form.

When gerunds are used as the subject of a sentence, they take the singular form of the verb. However, when they are linked by "and," they take the plural form.

A collective noun, such as "team" or "staff," can be either singular or plural depending upon the rest of the sentence. Typically, they take the singular form, as the collective noun is treated as a cohesive single unit.

Titles of books, movies, novels, and other similar works are treated as singular and take a singular verb.

You can also download our shorter top 10 rules infographic and keep it handy. To see more sentences showing the correct subject and verb agreement, check out examples of subject-verb agreement.

What would a grammar lesson be without a few exceptions to the rules? Let's review some of the most notable exceptions.

From the perspective of modern linguistics, the problem with grammar rules is that many of the rules aren't absolute. There are a wealth of exceptions to rules, as we can see here. It can prove helpful to bookmark condensed lists of rules like this. Truthfully, the best way to keep your grammar on point is to read, read and then read some more! In the meantime, have fun with these five tips to improve your grammar further.