When you diagram sentences, you identify the sentence’s different parts of speech and how they work together. Even the simplest of sentences must have a subject and a verb, and grammatical rules dictate how the subject and verb interact. Keep reading to learn how to diagram a sentence and why diagramming sentences can give you a deeper understanding of the English language. 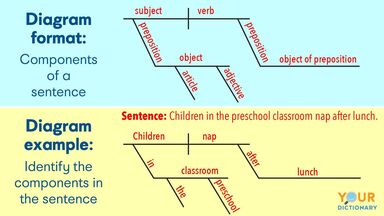 Although there are several methods of diagramming a sentence, each involves separating the subject, the predicate (the verb) and the other components of a sentence.

Those components can include:

Diagramming sentences helps you identify how the parts of a sentence work together. It provides a deeper understanding of the function that words play in sentences. This can help make your own writing clearer and free of grammatical errors.

How to Diagram a Sentence

Now that you know the parts of a sentence, you’re ready to start diagramming! There are four types of lines you’ll need for sentence diagramming:

Plan out your diagrammed sentence by finding the most important words – the subject and the verb – and continuing from there. Follow these simple steps to properly diagram any sentence.

The baseline is the top line of your diagram. It highlights the fundamental pieces of the sentence: the subject, verb and object.

Each of the other components of the sentence belong below the baseline of the sentence, according to specific sentence diagramming rules. These parts include modifiers, prepositions, indirect objects, subordinate clauses, articles, interjections, and so on.

If your complex sentence has a subordinate clause as well as an independent clause, you’ll need to diagram it as well. Subordinate clauses are treated like modifiers joined by conjunctions in sentence diagrams.

If you’re writing a sentence and something doesn’t sound quite right, try diagramming it. You may find that your modifiers are too far from their modified words, you’re missing an article, or your sentence is a fragment. Diagramming sentences is a great way to clear up common grammatical errors in your writing.