What Are the Different Parts of a Sentence? 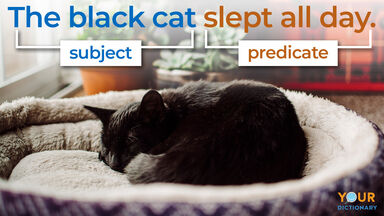 Required Parts of a Sentence

The eight parts of speech — nouns, verbs, adjectives, prepositions, pronouns, adverbs, conjunctions, and interjections — form different parts of a sentence. However, to be a complete thought, a sentence only needs a subject (a noun or pronoun) and a predicate (a verb). If you only include one of these two parts, you will have only a sentence fragment, which is grammatically incorrect.

Subject of a Sentence

In general, the subject refers to the part of the sentence that tells who or what the sentence is about. The subject is a noun, pronoun or noun phrase.

Examples of subjects in sentences include the words seen in bold below:

Notice that the subject comes before the verb in each sentence (is, made, joined). No matter how long the subject is, it is always the noun performing the object.

Predicate of a Sentence

The predicate of a sentence includes the verb and everything that follows it. This typically tells what the subject does with an action verb or describes the subject using a linking verb and a complement.

All of these words make up the complete predicate of the sentence. The verb alone is the simple predicate. As with subjects, it's also possible to have a compound predicate that consists of two different actions.

Take a look at the examples below to note the differences:

Predicates can contain a good deal of information and may be quite long. They often have several parts in addition to the verb, including objects and complements.

Optional Parts of a Sentence

Now that you know the two main parts of a sentence, take a look at how optional elements work. These elements include objects, complements and modifiers.

Objects are noun phrases that are included in the predicate. Direct objects are the things being acted upon by the verb. They answer questions that begin with what.

Indirect objects include more information about the person or thing towards which the action is directed. They answer the questions that begin with who.

You can also rephrase these sentences so that the indirect object appears after the direct object in a prepositional phrase. For example, "Susan bought the gift for him" is also a correct way to state the sentence.

In predicates that use linking verbs rather than action verbs, nouns following the verb are known as complements. Complements can be nouns, noun phrases, pronouns, or adjectives. Subject complements, also known as predicate nominatives, modify the subject by describing it further.

Object complements function the same way, but for the object of the sentence instead. They follow transitive verbs, which express action performed toward an object.

These complements help to explain more in a sentence. You can see how they fit into a sentence when you practice sentence diagramming.

Like complements, modifiers add additional information. Adjectival modifiers modify nouns and pronouns, while adverbial modifiers modify verbs, adjectives, and other adverbs. It is possible for parts of speech to do this work alone in the sentence in either the subject or the predicate.

Not all modifiers are single words. Sometimes they are groups of words, known as phrases, that work together.

Modifiers are optional when it comes to writing sentences. They merely give additional information and are not required the way a subject and verb are. Note that complements are considered to be a type of modifier as well, but they are more important to the meaning of a sentence.

In your writing, knowing that each sentence requires a subject and a verb will help ensure that you write grammatically complete sentences. Using complements, adverbials and other modifiers will add interest. Just be sure not to use too many in the same sentence to avoid confusing run-on sentences.