English sentences follow specific grammar patterns, and once you get familiar with these sentence patterns, your writing and understanding of the English language will improve. Examples of each pattern can help you recognize these types of sentences in daily life and learn to use them in your own writing. 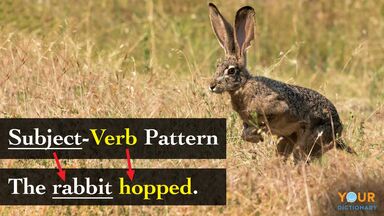 Sentences come in all different styles, but the following are some of the most common grammar patterns you’ll see. If you learn these eight patterns, you’ll have a good grasp on how the English language works.

A simple sentence has a subject and a verb. It can be a single subject, such as “cat,” or it can be a compound subject like “cats and dogs.” Similarly, it can have a single verb like “ran” or a compound verb like “ran and jumped.” Here are some examples of sentences with subject-verb patterns.

Another very common sentence pattern in English is the use of a subject and a verb with a direct object. A direct object is a noun or a noun phrase that is being acted upon. Direct objects are only necessary with transitive verbs, verbs that act on someone or something. These examples will help you understand.

An adverb modifies a verb, and you’ll find it in many English sentences. Adverbs often end in -ly and tell how a verb did something. You’ll sometimes see an adverb before the verb, but a common sentence pattern is to see it after the verb. Here are some examples of the sentence pattern that include subject-verb-adverb.

An adjective modifies a noun. It can come before the noun in a simple sentence, but it’s also very common to see the adjective come after the verb. Here are some examples.

Another common grammar pattern in English is subject-verb-noun. In this pattern the verb is often a form of “to be,” showing that the subject and the ending noun are equivalent. You can see this in these examples.

You’ll also see compound sentences, which are made up of two or more independent clauses. These clauses each include a subject and a verb, and they are connected with a conjunction, a semi-colon or another mark of punctuation. Here are some examples.

When you combine two or more independent clauses and one or more dependent clauses, you are creating a compound-complex sentence. This is a sophisticated grammar pattern that will make your writing and speech seem more professional. The clauses can be in any order, and the independent clauses must be joined by a conjunction or appropriate punctuation. These examples will show you how it works.

The Building Blocks of the English Language

There are many types of sentences in English, and these common sentence patterns are only a few of them. However, if you know these basic patterns, you’ll be able to see how other sentence patterns work too. These grammar patterns are the building blocks of the English language. The next step is learning how to combine sentences.