Combining sentences is a necessary part of fluent communication in the English language. However, with all of the transitions, subjects, predicates, verbs, and verbals to consider, it's easy to become overwhelmed. But sentence combining doesn’t need to be a chore! Keep reading for various techniques to combine different types of sentences. 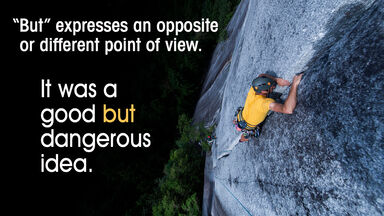 Independent clauses are essentially two full sentences that could stand on their own. In other words, they don't depend on another clause to allow them to make sense. They each have a subject and a verb.

These sentences must be combined with the use of a connecting word known as a coordinating conjunction. Some popular conjunctions often used to achieve this purpose are known as FANBOYS (for, and, nor, but, or, yet, so). Each expresses something different, so use them wisely!

The semicolon is one of the most feared punctuation marks used in the English language. But really, it’s just a sophisticated form of punctuation that replaces a conjunction or a period. A semicolon is useful when combining two independent clauses that are related to one another.

Try out some of the above sentences with a semicolon:

Semicolons are a nice way to provide variety in your sentence structure. But be sure to use them sparingly in each paragraph, as too many semicolons can make your writing feel repetitive.

Combining Sentences With the Same Subjects and Verbs

Check out these sentences that have the same verbs:

Notice that subjects, verbs, and independent clauses all have something in common. Combining sentences can omit unnecessary words, making your writing more concise and less repetitive.

With these simple rules for combining sentences, you can now combine sentences confidentially to make your speech and stories much more interesting. Readers enjoy a variety of sentences in written work. For ideas about bringing sentences together in the classroom, read an article that details different ways to teach sentence combining.