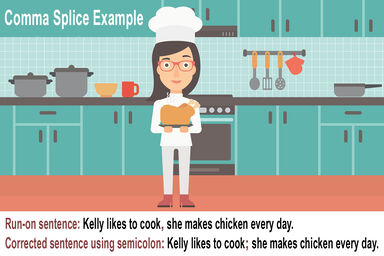 Components of a Sentence

Each sentence has three necessary components:

For more on sentence structure, explore our examples of syntax.

Let's look at how a simple sentence -- like "Jim is cold" -- incorporates subject, action and complete thought. In this sentence:

For more help differentiating between the two, try our article comparing independent and dependent clauses.

Run-on sentences come in many different varieties. Here are three of the most common types:

Here follow examples of each type of run-on sentence described above, with explanations for how to fix them.

Kelly likes to cook, she makes chicken every day.

Kelly likes to cook; she makes chicken every day.

Mary likes dogs she has a beagle.

This exemplifies a fused sentence: two independent clauses written together without any punctuation or conjunction to separate them. All that's necessary to fix this sentence is to insert the proper punctuation. Both of the following are valid ways of rewriting the same sentence.

Mary likes dogs; she has a beagle.

Mary likes dogs. She has a beagle.

We went to the park and we ate dinner and we got ice cream and when it got dark we chased fireflies.

This is polysyndeton: the use of excessive conjunctions to extend the length of the sentence. In this case, the word "and" is overused. Sometimes, the overuse of conjunctions like "and" is a deliberate rhetorical choice. Most of the time, however, it's a simple error with an even simpler fix: divide the statement into separate sentences with a bit of punctuation:

We went to the park. Then, we ate dinner and got ice cream. When it got dark, we chased fireflies.

Run-on sentences are easy mistakes. Run-on sentences appear in all sorts of writing, especially in first drafts and time-sensitive writing. As long as you keep to the advice above, however, you should be golden.

If you'd like to read more about the most common kind of run-on sentence, have a look at these examples of comma splices. Happy editing!