Can you identify the verb phrase in a sentence? Understanding verb phrases is helpful when speaking, writing and avoiding grammar mistakes. Keep reading for the definition of a verb phrase and how it is structured in different types of sentences. 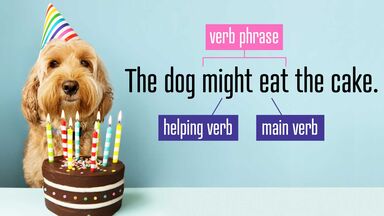 You can also create verb phrases without helping verbs at all. These sentences can only be set in present or past verb tenses. For example:

Like all phrases, verb phrases express an idea but cannot stand alone as a sentence. They can also include modifiers, complements, and direct or indirect objects as complete verb phrases.

Proper sentence structure requires both a subject and a verb. But unless that verb is in the past or present tense, sentences use verb phrases. Using the correct verb phrase structure depends on the verb tense, the subject and the mood of the sentence. When forming verb phrases, it’s helpful to know which verbs go in each position.

Helping verbs are also known as auxiliary verbs or linking verbs. They are short words that connect the subject with the rest of the sentence. Some examples of helping verbs include:

In verb phrases, these short verbs function as finite verbs, which establish tense, speaker and mood, but don’t make sense on their own. They use nonfinite verbs to indicate what is happening in the sentence. For example:

Tom is tutoring his brother.

The verb phrase “is tutoring” contains the finite verb “is.” It indicates that the sentence is in present tense, the speaker is singular, and that the mood is indicative. The word “tutoring” is a participle, which is a verb used as an adjective (“tutoring” describes Tom in this sentence).

More examples of helping verbs in verb phrases include:

Modal verbs are another kind of helping verb. These verbs express possibility, obligation and suggestions. They include:

Modal verbs are also finite verbs. They aren’t conjugated in different tenses, but they do establish the speaker and mood. Examples of sentence verb phrases that have modal verbs are:

The modal verb “will” appears in sentences set in the future tense. Other modal verbs let listeners know that they have permission or obligation to complete the other verb in the verb phrase.

Main Verbs in a Verb Phrase

Now that you know how helping and modal verbs work, it’s time to look at the other part of the verb phrase. Main verbs establish the action of the sentence. They can function on their own or with a helping verb in a verb phrase.

Examples of the main verb from the sentences above include:

Unlike helping verbs, main verbs provide more details about what the subject is doing. They work with the helping verbs in their verb phrases to create a full picture of the sentence’s action.

How to Use Verb Phrases

Identifying verb phrases is simple enough. But can you use them effectively in a sentence? Check out the different ways you can use verb phrases as sentence predicates and modifiers.

A verb phrase can be the predicate of a sentence or a clause. In this case, there will usually be a helping verb in addition to the verb. Here are some examples of a verb phrase as a predicate:

These verb phrases follow the subject of the sentence and function as the action in the sentence. Verb phrases can include all of these words in the predicate, or the helping and main verb only. It depends on how the phrase is used.

Verb phrases can only be used as verbs in a sentence. This might be confusing when you see verbal phrases, which are phrases that use verbs and the words that follow them as nouns, adverbs and adjectives. These verbals do not show the action of the verb; that’s the verb phrase’s job.

Don’t be fooled by these tricky verbals. Just because they use verbs doesn’t mean they are verb phrases. Understanding the difference between verb phrases and verbal phrases is especially helpful when diagramming sentences or proofreading writing.

Learning All About Verbs

Verb phrases are effective ways to show the action in their sentences. Since verbs are all about action, get moving with some fun practice exercises! Ten fun verb games are sure to entertain young learners, while a list of helping verb games is a great way to reinforce important grammar skills.