What Is a Predicate?

"It's the basis of ordinary etiquette / to be sure of your subject and your predicate." This lyric from a children's play about acceptable grammar is certainly true; however, not everyone can point out the predicate in a sentence (even if they are sure of the subject). Learn more about what a predicate is with the predicate meaning and how to identify one in a sentence. 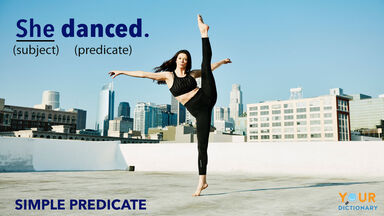 what is a predicate example
Advertisement

What Is a Predicate in a Sentence?

A predicate can be as simple as a single word that shows the action in a sentence. It is used to tell you what the subject of the sentence does. Look at a few of the shorter sentences in the English language. The subjects are underlined and the predicates are bold.

Predicates vary in length and complexity. The sentences below are very simple examples of what predicates are since the predicate is expressed entirely by one verb. A simple predicate may also be a short verb phrase.

In the examples below, the complete predicate is in bold in each example, while the subject is underlined. The simple predicate is noted in parentheses after each sentence.

A complete predicate is the verb that shows the action and the modifying phrase that completes the thought, basically everything in the sentence that isn't the subject.

As with the section above, the complete predicate is in bold in each example, while the subject is underlined. The simple predicate is noted in parentheses after each sentence.

In the examples below, the subject is underlined, the complete predicates are bold and the simple predicate is noted in parentheses after each sentence.

Understanding Other Examples of Predicates

English grammar is known for exceptions and special circumstances, so you're probably not surprised to learn that there are a few special cases to consider with predicates.

"I am" is often described as the shortest sentence in the English language, but this is not exactly true. While it can be a complete thought and does contain a subject and a verb, it doesn't explain what "I am."

Now that you know "I am" is not technically a complete sentence, you'll probably be quick to notice other examples that seem like complete sentences but lack a predicate, such as "I can" and "I will." What might confuse you is the sentence that seems to lack a subject.

As surprising as it may sound, the shortest complete sentence in the English language is the imperative statement, "Go!" How can this be? After all, "go" is a verb seemingly without a subject or a predicate. There are two things you'll need to understand before this example will make sense.

Every sentence has two parts: a subject and a predicate. The predicate is used to tell the reader what the subject does. It contains a verb and shows action. Predicates can be one verb or verb phrase (simple predicate), two or more verbs joined with a conjunction (compound predicate), or even all the words in the sentence that give more information about the subject (complete predicate). To find the predicate, simply look for what the subject is doing. Now that you're familiar with predicates, take the time to explore different parts of sentences.