Sentence formation is one of the key ingredients to good writing. There are several forms of sentences you can use in your writing — simple, compound, complex and compound-complex — and knowing how to use all of them will allow you to express your ideas with clarity and in great detail. You'll also be able to add variety to your work to keep the reader interested. 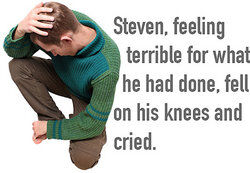 man on his knees

Before you start writing compound-complex sentences, you'll need to understand the two types of clauses in a sentence. A clause is any portion of a sentence that includes a subject and a verb.

Each of the sentences above has a subject and verb, and it stands by itself as a complete idea. This is an independent clause or a complete simple sentence.

The other kind of clause is a dependent clause. These are not complete sentences, but they do contain a noun and a verb. For example:

When you write a compound sentence, you need to use a comma before the coordinating conjunction to punctuate your sentence correctly.

Note that the dependent clause can be at the beginning, middle, or end of a compound-complex sentence. No matter where it is placed, the punctuation follows the rules for both compound sentences and complex sentences.

That means that you need to put a comma before the coordinating conjunction and, if applicable, another comma after the dependent clause when it occurs at the beginning of the sentence.

See some additional examples to get a feel for how compound-complex sentences will help you add detail to your writing:

Adding Flexibility to Your Writing

Writing compound-complex sentences allows you a great deal of flexibility to explain how, why or when something happened. It's important to understand which parts of the sentence are independent clauses and which are dependent clauses so that you can punctuate it correctly and avoid writing a run-on sentence. Once you master this, you can freely add them to your writing to express more complicated ideas with clarity.

For more information on types of sentences and sentence structure, take a look at our sentence variety examples. They will show you how using varied sentence types and combining sentences add impact to your writing.