The winds of change ushered in the 1950s as a decade of conservatism, complacency and contentment in the great American society. The slang of the 1950s reflected the mood of the decade. It is fair to say that 1950s slang was a vernacular that became a primal language for teenagers who sought independence and liberation while also continuing to reflect the traditional values and lifestyle of the times. 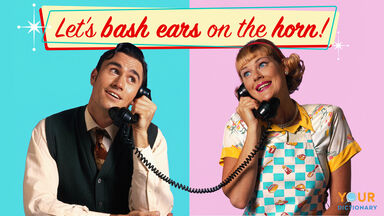 These were the years that the baby boomers were conceived. It has long been said that, during this time, one baby was born every seven seconds in the United States. Explore some of the many ways people were discussed during this colorful era.

1950s Slang for Places and Things

A lot of slang terms from this list are still commonplace today. Many of us pop on cheaters to read something or throw on our shades before stepping out in the sun.

The American Dream became a reality for many families during this prosperous decade. They began living the suburban lifestyle in family homes complete with front lawns, small backyards and garages. Teenagers were going steady and always inventing new words to hide their teenage love affairs. This led to a lot of slang for everyday experiences.

Slang Phrases and Expressions From the '50s

Some of the best slang from the '50s is longer than just a word or two. Many longer slang expressions were used throughout the decade.

The 1950s was an age of consumerism, with even babies targeted as potential customers. The evolution of television ushered in shows that embodied the spirit of the era, such as The Ozzie and Harriet Show, Father Knows Best and Leave it to Beaver. It was a time where patriarchy reigned supreme; the quintessential role of a woman was that of a mother and housewife.

It was during this era that America had become more of a homogeneous nation, resilient to change. After all, it had taken a decade to rebound from the depression. There were drive-in movies, Howard Johnson's and those primal golden arches that embody all things American — McDonald’s was born.

All of this, plus the brooding idea of McCarthyism and the rising Red Scare of Communism in the undertow, gave 1950s slang a covert language all its own. On one end, there was homogeneity in America. On the other end, there was the business of communism and the radicalism of the American teenager. As with many other eras of the past, some of the slang words from the '50s are still being used today.

Need Some Slang for Your Next Novel?

If you're writing a short story or novel that's set in another era, it’s of utmost importance to make sure you get the language right. Otherwise, it won’t ring true. Explore a wealth of slang-related articles, covering nearly every decade from the early 20th-century and beyond. You'll even find a selection of specialized slang terms. For example, these military slang sayings can be helpful if your writing includes characters who serve in the arm forces. Whatever slang you're looking for, you're sure to find it here.