If it's boss, hip, or happening, you're bound to be listening to some of the slang from the 1960s that still resounds in today's language. As you read this list of 1960s slang, you might be surprised to find out how much of it has lasted through the decades. 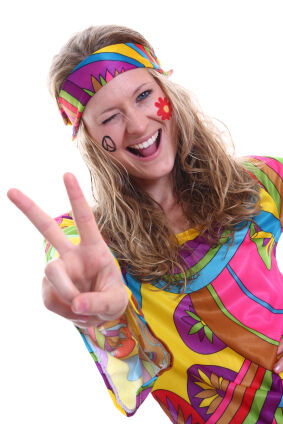 Girl dressed as a 1960s hippie as 1960s slang
Advertisement

Back in this turbulent decade, you might expand upon the word "cool" with a word like "boss." That means something is really, really cool.

Among the 1960s hipster contingent, their lingo included phrases to describe superlative experiences:

Having the latest and newest of anything, then as now, is of extreme importance to those who are truly hip.

Maybe the problem was with your bread. No, we're not talking whole wheat or rye here, we're talking about "bread" as a 1960s term for money. A lack of bread would be enough to bum anyone out!

Since being cool was of such importance, the worst thing to happen to you (maybe aside from lacking bread) was to be labeled as uncool or "square."

Learning about slang from different eras can transport you to a different time in your life or introduce you to a whole new style of language. Here's a selection of 1960s slang for you to get acquainted (or reacquainted!) with.

Fast cars and fast lives. The '60s were an era of rebellion so, to no surprise, that means some exciting car lingo. Let's take a look:

Just like today, life in the '60s was full of the good, the bad, and the ugly. Here are some of the most popular expressions used to provide commentary on various experiences:

If there's one thing people have in common, it's opinions about others. Here are some of the more unique ways "hunks" and "skirts" talked about other people during this time:

The people of the '60s were full of opinions about their surroundings too. Here are some of the ways they referred to "groovy" spots around town:

People, places, and things. Below, you'll find some unique terminology to describe things, from boob tubes to peggers.

Hip to the Hippies

Do some of these slang words and expressions look familiar to you, even if you weren't around in the 1960s? Well, that's quite possible! Some of these expressions came back to life in later decades, and some of them really never faded from use at all. For example, many people today still use the word "zit" and the phrase "bugging out" and probably don't even know how long they've been around.

For more on that, enjoy this overview of American Slang Words.