Cool 1970s Slang: Words and Sayings From the Disco Era

The 1970s was a cool era. After all, they invented (what seems like) a hundred different ways to say "cool." It was also the disco era; hello John Travolta. Wartime was over, people were relieved, and a major shift took place. You'll find that we still use a lot of this decade's lingo today. Language that goes underground for a while tends to spring back up again. Explore a list of some cool 1970s slang from the days of disco. 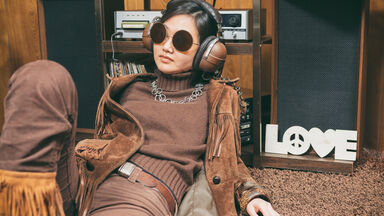 The best place to start is with some of the most important lingo of the disco era. Check out a selection of words to describe places, as well as what to say to enter or exit places with ease.

The term "cool" was a popular slang word in the '70s, but there was also a lot of other slang terminology for that particular word. During the disco era, there were just as many ways to describe something as being cool are there were ways to be cool.

Next, consider a list of expressions that name or describe various things from the 1970s. Some of these slang terms have stuck around. Raise your hand if you still refer to your clothes as threads.

Of course, what would the world be without people — good, bad or otherwise? Here's a list of cool 1970s lingo to describe all kinds of people.

There was a lot going on in the 70s. Needless to say, there were hundreds of different ways to describe the happenings of your life in this era. Let's take a look at some of the most popular expressions.

The vernacular of the 1970s also included quite a few slang words to describe activities that people might commonly engage in.

1970s Slang for Actions and Reactions

There are also quite a few 70s slang terms that describe what people might do or say, as well as how they might react to what others do.

Not all 70's slang fits neatly into a category. The disco era is known for many other groovy slang sayings and expressions.

A lot of these expressions are still used today. Another popular decade with its own terminology that still carries on is the 1960s. Enjoy this list of 1960s slang and reminisce or fantasize about riding shotgun as your buddy is laying rubber. Better yet, do the likes of Aerosmith, Bon Jovi and other hair bands of the 80s live on in your heart today? Then, be sure to get down with this long list of 1980s slang. Are you bad to the bone with some funky fresh gear? Enjoy learning to speak slang of the past and today.