Let's travel back about three decades to a time of leg warmers, crazy hairstyles, and a whole other language. Learning about slang from the 1980s might set you on a path of memories or it might introduce you to an entirely new language. Chances are you've heard some of these phrases before; slang tends to permeate the generations. With "barf" and "bitchin,'" we even found some holdovers from the 1950s! Here are some of the most popular phrases from the '80s. 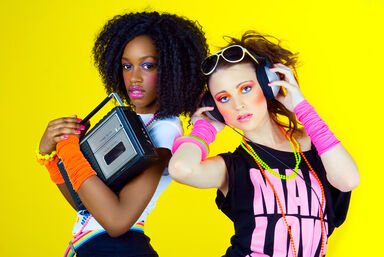 Fundamental Slang of the 1980s

One of the signature qualities of slang is that it presents stylish ways to say simple things. Here follow words that simply mean "yes," "no," "good," and "more of." We've also included a few simple exclamations and the defining verb/adverb/conjunction/quotative, not just of the 1980s, but of the entire post-1980 American vernacular: "like."

You might think that one word meaning "yes" -- with maybe the occasional "yeah" or "sure" -- would be sufficient for English. The 1980s thought otherwise. These are the classic 80s affirmatives.

Slang That Means "No"

Once again, you might imagine the single monosyllable "no" could cover the full range of negatives, '80s or otherwise. Not so much. Context matters!

Indicating approval of something is more complex than it might first appear. Calling a dog "a good boy," a snowfall "a good amount" or a football tackle "a good hit" call for different usage of the word "good." Slang often makes those differences explicit with more nuanced word choices.

Slang That Means "More Of"

When you're looking for an intensifier to indicate "more of" something, or you want a more interesting word than "very," you may choose one of these "mad awesome" variants of the '80s.

Round out the basics with these slang terms from the 1980s.

Even as mainstream culture spoke of "morning in America" and "new optimism," actual people in the 1980s outdid themselves in ways to call things bad. Here follow just a few of the ingenious insults of the 1980s.

The '80s were rich with ways to show approval, too. Multiple subcultures contributed, as well as a cross-cultural trend toward hyperbolic, multisyllabic, deliberately old-fashioned slang - like "bodacious" and "most triumphant" - to describe minor successes.

Slang exists in large part to comment on the dominant culture of its day. It provides a unique, up-to-date vocabulary that people can use to talk about phenomena in their daily lives in ways dictionary English doesn't allow.

The 1980s were rich in terminology that identified and often satirized perceived class and cultural signifiers.

While the roots of hip hop extend earlier in the century, the 1980s represents the beginning of hip hop's massive influence on mainstream culture and language. Easily the most linguistically important musical genre of the last 40 years, hip hop necessitates its own section, separate from other musical genres and subcultures.

Other Music and Dance

Hip hop's outsized influence shouldn't obscure the fact that the 1980s produced many other influential genres of music. Both electronic music and heavy metal entered the mainstream in this era.

Nostalgia brought back old subcultures like mods, rockers and their inheritors, the punks. In many cases, 1960s and '70s slang came with them, with "acid house" following the naming convention of '60s vintage "acid rock." Fast, raw music and fashion had been associated with "punks" well before the Sex Pistols took the word mainstream in the late 1970s too.

Surf culture and surf slang have an ongoing relationship with American English. The significance of surf slang waxes and wanes with the influence of Hawaii and California on colloquial English, but it's always present.

Thanks to defining '80s pop culture moments like Bill and Ted's Excellent Adventure and Fast Times at Ridgemont High, both of which featured extensive use of surf slang, surf culture loomed large in the 1980s.

Here are a few example sentences to put these '80s words in their proper context.

Look at the list of 1980s slang words and phrases again. Do you notice that you might use them in everyday speech today? Chances are that you do, since these words were not reserved explicitly for conversations in the 1980s. Some of them came into existence before the decade began, and some of them, such as "so '87," did not appear until later on in the decade.

In any case, looking through old slang is a worthwhile lesson about language. You might think that you invented "wicked" or "yo mama," but they have actually been around for awhile. If you think we missed your favorite, be sure to read our list of '80s catchphrases.